An action platformer released on the Super Famicom. Abel travels through the depths of Hell to rescue his daughter and defeat the King of Demons.

Majyuuou is an action platformer developed and published by KSS for the Super Famicom in 1995. The player, as Abel, discovers that his former friend Bayer has sacrificed Abel's family to resurrect Lucifer and acquire demonic powers as his reward. Abel decides to travel through Hell to rescue his daughter with the help of his deceased wife's spirit, frequently running into the demonic Bayer who mocks him from the shadows.

Majyuuou was never officially localized outside of Japan but Aeon Genesis did release an English patch for the game on February 14, 2003 and translated the title to "King of Demons."

Majyuuou features Abel in his human form initially, though after every large boss the player can acquire an orb that will transform Abel into a demonic form of his own. His demon forms are a lot more powerful and include a flying red demon who uses energy boomerangs, a green reptilian demon with a laser, and a blue dragon with a powerful short-range breath attack. The player can either pick the same form several times, which unlocks a much stronger version of that form, or they can alternate every stage and end up with the ultimate demon form for the final stages.

In his standard human form, Abel uses a gun that has infinite range and ammo, but can only attack enemies horizontally. The player can charge up a powerful blast by holding down the attack button, and each of the demon forms also have their equivalent charge moves. 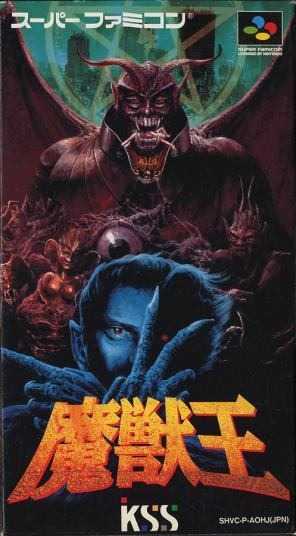