A single-screen arcade platformer reminiscent of Snow Bros. and Tumblepop, ZuPaPa has players controlling the titular cute creature as they throw smaller "Zook" creatures at enemies to stun them, then hit the enemies to cause an explosion of stars.

ZuPaPa! is a cutesy puzzle-platformer developed by SNK (originally by FACE) and released by SNK for arcades (using Neo Geo MVS hardware) on September 1, 2001.

In this single-screen platformer reminiscent of Snow Bros. and Tumblepop, players control the titular creature ZuPaPa (or, as Player 2, ZuPiPi) as they collect and throw smaller creatures (known as "Zooks") at enemies to stun them. Enemies who are being pummeled by Zooks can be touched, causing them to explode into stars that destroy (or damage) other enemies, with additional Zooks causing greater explosions.

It is one of the few games built for Neo Geo MVS hardware that were not released on either Neo Geo AES or Neo Geo CD home platforms. It was, however, later digitally re-released by HAMSTER as part of the ACA Neo Geo series on October 4, 2018 for the Xbox One, PlayStation 4, and Nintendo Switch (with the North American PS4 version released on July 2, 2019), followed by a PC version on July 26, 2019.

Originally developed in the mid-1990's by FACE and first showcased in 1994, the game was released in 2001 as the last game before SNK's bankruptcy. 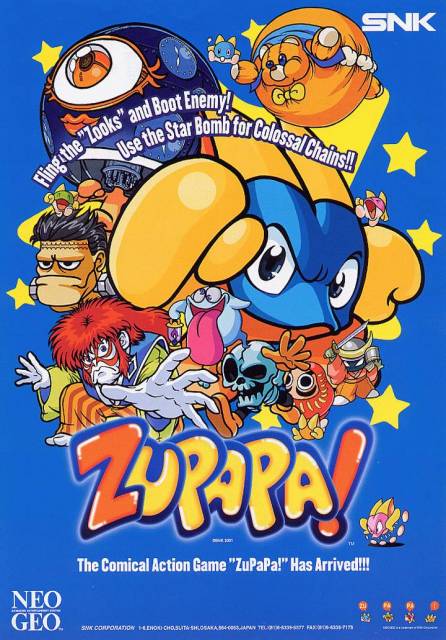