Hoppin' Mad is an action game released by Elite Systems for the ZX Spectrum, Amstrad CPC, and Commodore 64 in 1988 (and a subsequent budget release on the Commodore 64 in 1990). Originally, there was a planned Nintendo Entertainment System port of the game, and an unfinished ROM of the game can be found online. The NES port contained twelve levels similar in style to the levels found in the other three versions.

A traditional side-scrolling action platformer, Hoppin' Mad is focused around collecting ten balloons in each level in order to move onto the next one. What differentiates Hoppin' Mad from other action platformers is that the player is always in control of a group of perpetually bouncing balls. These four balls have to be guided around obstacles and toward balloons.

These four balls serve as both the player character and the health indicator. There are a variety of enemies in the game, ranging from environmental obstacles to antagonistic animals. Every time the player is hit, one ball is lost from the group. After all four balls are destroyed, the player loses a life.

Guiding the balls is done in two ways. The player is in control of the rate of speed and the bouncing height. These are both altered by moving the joystick particular directions.
Balloon Fight Xyzolog 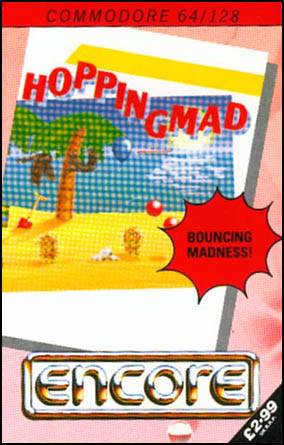