Firefall is a massively multiplayer online role-player game with action-based combat that can be played from a third- or a first-person perspective. It's a free-to-play game with a sci-fi theme that pits mechanized humans in battle armor against alien invaders.

FireFall is a sci-fi-themed massively multiplayer online role-player game with action-focused combat that can be played from either a first- or a third-person perspective. It is a free-to-play game with various purchasable upgrades, ranging from basic cosmetic changes, like hair styles and paint jobs, to additional battleframes, which serve as the game's different "classes." The currency used to purchase these items can be acquired without the use of real money transactions through a series of currency exchanges found in the game.

Red 5 Studios has said the game cost almost as much as World of Warcraft to produce and will be made available free with no velvet ropes, DLC or content/levelling blocks. Currently there are five types of battleframes: Recon, Medic, Assault, Engineer, and Dreadnought. Each class has a series of battleframes associated with them, and each frame is leveled up separately.

Orson Scott Card, renowned sci-fi author and author of "Ender's Game", is contributing to the back story. Players take the role of extraction teams, mercenary bands hired by the Accord Military, which has imposed martial law after the crash of the Arclight faster-than-light spacecraft on its maiden voyage. The Arclight's attempt to break the speed of light ends in disaster, unleashing a menacing energy storm upon the Earth, known as the Melding. The Melding destroys vast swaths of Earth, leaving the crash site of the Arclight, Fortaleza, Brazil, as the only know remaining enclave of Humanity left. Out of the Melding come a sinister race known only as the Chosen, who seek the final destruction of Humanity. Players must don special powered armor, known as Battleframes, to ward off the Chosen and extract the valuable resource known as Crystite to power their equipment and fight to save Humanity.

"Battleframe" is the term used by FireFall for what are essentially classes. Battleframes can be switched at any time at nearby Battleframe stations, and each Battleframe is levelled independently. Batleframes can be customized with loot found or crafted in the world, giving them unique active and passive abilities as well as other benefits such as movement speed or other perks. There are five Battleframes announced so far:

Sniper frame, and most twitch heavy. Takes more than one shot to down an enemy, except for another Recon, where one head shot will take out another Recon. Special abilities include a range of specially ammo, which when slotted can freeze enemies or plant long range mines or teleport beacons.

Similar in some ways to the obvious Team Fortress 2 analogue, the medic has a heal beam whose secondary fire can be customized to either overheal or as a vampiric beam that leaches HP from opponents. Special abilities include AOE heals and a defibrillator which can also do great damage to enemies.

Specializes in deployables, such as shields which act as cover, and turrets. Turret fire can be directed via the SIN network to target particular enemies. Engineers upgrade their deployables through a wrench system.

Wears the heaviest armor in the game and carries a devastating minigun, at the cost of being the slowest class.

The central part of the game is the open world co-op. The Melding surrounds Fortaleza, and players are confined initially to a two-and-a-half square mile area, which sounds tiny at first, though it is actually the size of Grand Theft Auto III's Liberty City. In addition, through collective efforts, can "push back" the Melding storm to reveal new playable land up to ten square miles (roughly the size of Mafia II's Empire Bay). This co-op experience groups hundreds of players (200-300) per "channel" of this open world.

The developers have stated that the Open World will be heavily focused on "Dynamic Events", featuring the invasion by the NPC army known as the Chosen, who will take over towns and POIs (Points of Interest) within the Open World. Players must defend these areas, or lose access to their benefits. When a location is overrun by the Chosen, players will receive new missions to "retake" the areas lost. Other Dynamic Events are also available in the Open World, but have yet to be disclosed by the developers.

Everything in FireFall can be upgraded, from the Battleframes to the weapons. While signature weapons for each frame are fixed, they can be customized through a gun paper-doll system to add unique secondary fire modes such as triple-shot or nova-cannon for the Assault plasma rifle. Batteframes can also be customized by slotting various active and passive modules into their frames and backpack power plants. Frames are also customizable via the Warpaint system to provide several zones of colourization and, in the future, decals and adornments.

Frames can be leveled, each has its own set of ranks. Additional ranks allow players to slot in higher rank modules for different perks.

FireFall features "Horizontal Progression" instead of traditional MMO vertical progression. Players do not get much more powerful in terms of damage or HP, instead characters have access to wider and wider ranges of perks through the module system, giving them more tactical and gameplay options. Players make choices through the load-out system and choose a subset of these modules to use at any given time. This allows players to customize multiple frames of the same type for different roles or purposes, while limiting the amount of perks which can be slotted at one time. In this way, players of different ranks can still compete with each other effectively based on skill, with the ever-present RPG numbers simply enhancing their abilities, not allowing them to completely dominate.

FireFall uses a custom server and graphics engine designed to handle hundreds of shooter players at a time in any given area. Originally based of the Offset renderer (of Project Offset, and since acquired and abandoned by Intel), Red 5 Studios have completely overhauled the technology, adding features unique for FireFall such as massive terrain rendering, streaming virtual textures (ala Megatextures similar to id Software's Rage), and many other features. FireFall also uses Havoc for physics, and Morpheme for animation.

The contributing author to FireFall's backstory, Orson Scott Card, has taken very public stances against gay marriage and governments that support gay marriage. Card has written one manifesto and a version of Hamlet that is considered homophobic and derogatory of the gay community. The developers have maintained that Card does not represent the opinions of Red 5, and that they feel the literary work of the author should be excluded from his personal opinions. 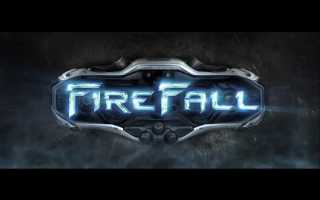