This game was to be the X-COM franchise's first entry into the first shooter genre, but is now considered vaporware.

This game is canceled, and should not have a release date or be attached to any concept, object, location, or character except the Canceled Games page. See the page for details.

X-COM: Alliance was being developed by Hasbro Interactive to reinvent the X-COM franchise. Unlike other games in the X-COM series, Alliance was a First-Person Squad Shooter, in which the player assumed the role of a soldier in a four-man X-COM squad, fighting the hostile aliens on their own turf.

The game takes place in 2062, when an Earth research ship, the Patton, travels to Cydonia, Mars, to acquire as much alien technology as possible. The Patton travels through a dimensional gateway and ends up many light-years from Earth. There they find the Sectoids engaged in a war with a new alien race, the Ascidians. The humans must join forces with this new race in order to defeat the Sectoids, hence the titular "alliance".

Development progressed, and game design advice was lended by X-COM development veteran, Dave Ellis, and the game even garnered favourable previews by several video game industry magazines. However, at the end of 1999, the Hunt Valley studio survived the first round of studio closures enacted by Hasbro Interactive when they decided to scale back their efforts in the video game industry. Later in 2000, the Hunt Valley studio was closed down and the game was put on hold. No plans have ever been made to resume the production of the game and the assets were repurposed into X-COM: Enforcer. 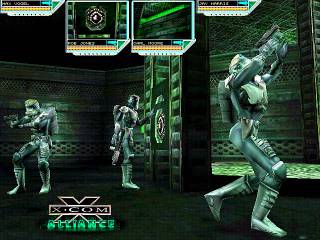