Phantasy Star Online 2 is a Japanese free-to-play online action-RPG which was released for PC in July 2012, and Vita in Feb 2013. The game was finally announced for a US release during E3 2019, for Xbox One and PC in 2020.

Phantasy Star Online 2 is an online-focused action-RPG for the PC, PlayStation Vita, iOS, and Android platforms. Developed internally by SEGA/Sonic Team, PSO2 is a sequel to the original Dreamcast/PC RPG Phantasy Star Online. The game was announced at TGS 2010 to commemorate the 10th anniversary of the original Phantasy Star Online's release. The game went through a closed and open beta period in the early months of 2012, and released in Japan for the PC on July 4, 2012. The mobile version of the game is currently slated for a Q4 2012 release and the PS Vita version is being targeted for Japanese release in early 2013. All versions of the game will run on the same servers, allowing players to use the same characters cross-platform, though the versions set to appear on mobile phone platforms are said to be reduced versions of the game. On July 9th, 2012, SEGA announced plans to localize the game for North American and European territories. An English PC version was slated for an early 2013 release, yet as of late March 2013, Sonic Team officially delayed the release in North America. Never with a true release date, the team continues to bypass any specifics as to when the title will make its way overseas.

PSO2 is a free-to-play game. Micro-transactions are applied to a variety of functions in the game such as new character slots or purchasing stat resets. These micro-transactions take place using a currency called Arks Cash, which can be purchased using real-world money. Arks Cash can also be spent on access to the "Premium Set," which grants access to a private room (which can be decorated), the ability to trade items, access to sell items via a searchable player-run shop system, and lobbies specifically built for use by premium members.

The game's successful open beta and launch, as well as excitement for a new game in the Phantasy Star series, has attracted a strong English community in the Japanese version, which attempts to congregate on Ship 02 and, more recently, Ship 10. The sudden influx of new players, a large majority being international, had forced SEGA to temporarily close down character registration on the most popular Ships from July 8th to the 18th. Character registration is now re-open on all Ships.

There are three classes to play as in PSO2: Hunter, Ranger, and Force. Players pick a class to start as but can switch to any other class at any time. Each class starts at level 1 and levels independently. When a player switches from one class to another, the previous class' progress is maintained and can be returned to at any time. The three classes have unique weapons, though all three can use the Gunslash, a melee/ranged weapon that swaps from one mode to the other on command.

The Hunter class is the melee class, and they focus on up-close damage with swords and photon arts. They have a higher HP count and the ability to chain attacks infinitely. PA attacks can be comboed into regular attacks, and proper timing can chain any combination of regular and PA attacks an unlimited number of times.

The Ranger class is the ranged class, and they focus on long-distance damage with rifles and launchers. They have a more average HP/PP count and have a variety of attack types. Rangers can use either Assault Rifles or Launchers. Assault Rifles are all three-shot burst and fire regular bullets by default. Equipping different Photon Arts can add rocket launcher, shotgun, sniper, or magic attributes to the weapons. Launchers fire single-shot rockets, and equipping different PA change the explosive effect of the rockets such as bigger splash damage or clustered explosions.

The Force class is the casting class, focusing on magical abilities with rod weaponry. They have a higher PP count versus a lower HP count and can support a party through healing and buffing, as well as providing offensive support through certain skills. Rather than equipping weapon-specific attacks onto rods and other Force-only weapons, the follow-up Photon Arts for Forces are spells, most of which have an elemental affinity such as fire, ice, and so on. Forces can also cast spells out of the hotbar.

There are a variety of quest types in the game, with three types of quests (Quest Counter, Client Orders, and the Matter Board) and several sub-types within those. Players are ranked when completing a quest, with the rank being dependent on the number of enemies defeated and the goal completion. The highest rank is the almighty S-rank.

Quest Counter quests can be accepted at the, quest counter. This is located on the top floor of the ship.

Free Exploration quests are unlocked through Koffee's client orders. These quests are only available after completing all of the Arks quests, and do not contain any in-area objectives. The goal is instead an Emergency Code: Duel, where players must defeat a boss in the third area. These bosses are significantly more difficult than regular or elite enemies and require a bigger time investment to defeat. While Free Exploration quests do not contain objectives within the first two areas, it is possible for one or more Emergency Code mini-quests to appear whilst exploring.

These are the default quests that can be accepted at the quest counter. They are unlocked in succession after completing the previous stage and have varying completion objectives. These objectives range from killing a certain number of enemies, completing different Emergency Codes, defeating a particular type of enemy. Arks Quests usually involve one or two areas.

Emergency Quests are daily events that will show up at the quest counter for a limited time during that day. Players are alerted of an Emergency Quest through a radio message (the scrolling text at the top of the screen) and cannot invite AI partners into the quest. They are located in a warzone/city area, are timed missions, and involve three areas. Area 1 is a solo stage which may or may not involve an Emergency Code mini-quest. Area 2 is a public area that contains a higher enemy count and higher chance of PSE Burst, with an equal chance of one or more Emergency Code mini-quests. The third and final area is an Emergency Code: Dual with a boss, usually of significant difficulty.

These quests are unlocked through the Matter Board and progress the game's story. They can only be played in a solo party.

Client Orders are character specific quests that you can accept on both floors of the ship. These characters will have objectives to give for you, some preset and some daily. Certain client orders may involve both types of quests within one.

The Matter Board is used to progress through the game's story. It contains multiple pages of quest orbs and completing quests on the board will unlock the connecting orbs. Each board has a set number of bright orbs and completing these orbs will unlock the next story quest. The objectives in the Matter Board can be all types of activities, with some orbs even being as simple as talking to a specific character. Most Matter Board objectives, though, are specifically focused on getting a specific type of enemy to drop a specific type of item. Unlike Client Orders and most other in-game quest systems, enemies only drop those specific items when the correct spot on the Matter Board is selected before leaving the ship and starting a mission. Once the player has started a mission, the Matter Board can not be changed.

Once the next story quest is unlocked and completed, a new page on the Matter Board opens up. Players may still return to the previous Matter Board to finish incomplete orbs.

During certain quests, Emergency Code events, also known as "interrupts", may trigger. This can be at random or because of a quest objective, and they come in multiple variations:

Additional note: While this may not be the case with every EC, it possible for certain Emergency Codes to stack. Attack and Collect, for example, can stack on occasion in the Caves area. There is no penalization for completing one before the other, or failing one whilst the other is active.

Though playing Phantasy Star Online 2 is free for all players, there are a number of items and features that can be acquired via Arks Cash. Arks Cash is purchased with real money, with a current conversion rate of 1 yen to 1 AC.

A Premium Account hides certain features behind a pay-wall, such as the ability to access your own private room and the ability to sell items via the My Shop system. While only premium players have the ability to put items up for sale, all players can purchase items from the player-run shop system. There is currently a worry that this will cause an economy imbalance (as Premium players will receive money from regular players, and not vice versa) from the community, and there is no word from SEGA on how they will solve this should it become an issue.

A premium account can be purchased with Arks Cash in 30-day intervals and must be renewed at the end of said period to continue retaining Premium privileges.

Though the premium account must be continually renewed, the rest of PSO2's AC-based offerings are often permanent unlocks or one-time-use items. Players can purchase extra inventory space, Scape Dolls that allow players to self-resurrect during missions, skill tree resets, the ability to create an second character, or even scratcher-style "tickets" that grant access to some of the game's pay-only costume parts.

SEGA has planned a road-map for future content updates within the next few months of Phantasy Star Online 2. These include new areas, classes, weapons, items, quests, events, and more. It is unknown at this time if SEGA plans to release PSO2 in North America with all of these content updates already included.

All of Awakening's new content will be accessible to all players once they reach character level 33.

In addition to the Giant Battlecruiser update, a mid-summer update will bring new character customization options. This will include new costumes, voices, accessories, lobby actions, and hair styles.

The biggest update is currently planned for fall, titled "Call of Mortality". This update will bring three new classes to PSO2, as well as five new weapon types with new Photon Arts for each. It will also bring new enemies and bosses, new Emergency Code interrupts, new story quests, and new Emergency Quests. In addition to the new content, the level cap will be raised to 50 (from the current 40) and it will introduce a new "Very Hard Mode" option for quests.

In addition to the mobile release of Phantasy Star Online 2, the PC version will see new content updates that will bring new bosses, areas, costumes, events, and gameplay tweaks.

After the initial round of private alpha testing in summer 2011, Sega / Sonic Team announced that the game would be pushed from its original tentative 2011 release into 2012 to give the developer time to adjust game elements based on user feedback. Another round of testing is planned to review these changes before the game's release. 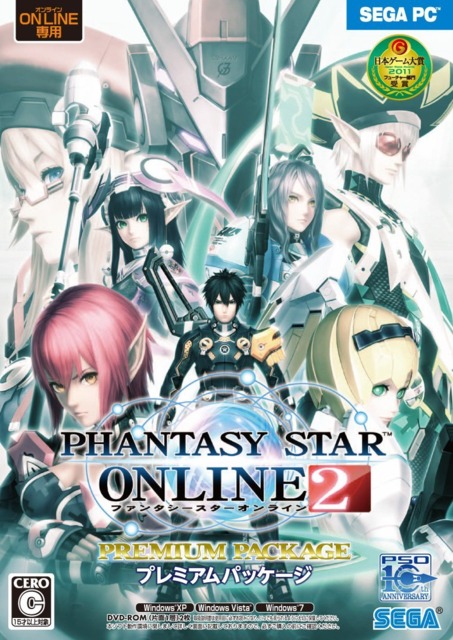