A shooter-platformer by Vlambeer, in which the player must fight off waves of enemies with a range of unlockable weapons. Also, crates are score.

Super Crate Box is a shooter-platformer in which the objective is to collect crates for a high score while fighting off hordes of enemies. With further progression through the game and higher scores the player can unlock new player skins, more modes of play, and more experimental weapons.

A game of Super Crate Box starts with the player in the middle of the level with a basic pistol and a single crate spawning at a random location. Almost immediately enemies will begin to fall from a hole at the top of the level, ranging from small green skulls, large green skulls, and flying white skulls, in varying patterns of waves.

Unlike most video games of the ilk, defeating enemies doesn't gain the player any points instead the only way to earn points (and progress to harder levels) is to collect crates without colliding with an enemy, which instantly kills the player. Each crate contains a different weapon which the player's character will automatically switch to. This presents a dilemma as some weapons are better at certain situations than others but in order to keep it the player must forgo earning points and thus progressing. To further complicate this task, a pit is placed at the bottom of the level which kills the player if they fall in, but upgrades enemies to a much quicker,dangerous state if they progress to the pit. They will then respawn at the top of the screen to repeat the path to the bottom, while new enemies continue to spawn. In order to maintain a high score the player must balance out the tasks of collecting crates with using the weapons found in the crates to keep enemy numbers to a minimum.

After subsequent playthroughs, the player will unlock certain milestones based off of high scores as well as total crates accumulated of the course of play time. These milestones will make available new weapons, characters, and unlock new levels and difficulties. Being as such, while the player's options are somewhat limited during their first few playthroughs, they can use unlocked weapons from prior games to improve their scores in further play.

Overall statistics the game keeps track of include:

An iPhone and iPad version has also been announced, and was scheduled to be released in September, 2011. But was eventually released on January 5, 2012.

Super Crate Box can be downloaded for free for PC and Mac on the game's website alongside an online leaderboard and a download link for the game's quirky chiptune soundtrack. Download it here

The game was also nominated for an IGF award in the Excellence in Design category, but lost to Desktop Dungeons. 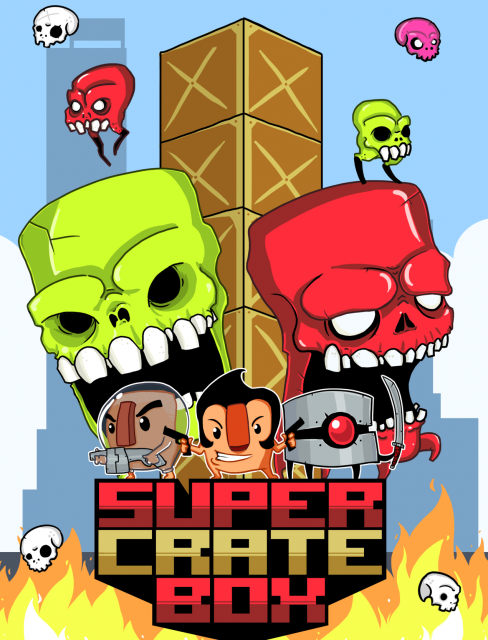