Telltale Games continue on from the events of the first Jurassic Park film with this cinematic adventure game.

Telltale's Jurassic Park: The Game tells a story that opens directly parallel with the story of the first motion picture and deals with the plot points that were abandoned after the 1993 blockbuster film ended. Mainly, Dennis Nedry's Barbasol can of dinosaur embryos, which serves as the opening plot point for the main characters to meet. The timeline of the game occurs both within the film and in the aftermath of the incident, and the player experiences these moments in part from the viewpoint of Jurassic Park's chief veterinarian, Gerry Harding. Other characters include Harding's daughter Jess and other inhabitants of Isla Nublar not seen in the movie, such as scientists, smugglers, or mercenaries. Like recent releases from Telltale Games, Jurassic Park: The Game is broken up into a series of four episodes. However, all four episodes ship with the game, with one easily transitioning to the next without having to purchase the next episode piecemeal.

Telltale Games has said to have been heavily influenced by Heavy Rain's mechanics. The game includes slow-paced investigation sequences where the player pans the camera and initiates sequences where the main character takes closer looks at key places. This is often accompanied with dialogue choices, moving between key locations within the puzzle area, and minor button-mashing sequences. It will also shift to immediate response Quick Time Events when a life or death situation presents itself, such as directional input either solo or in sequences, and also faster button-mashing sequences. If the player is not quick enough to complete the button prompts on the screen, they will either be rewarded with another chance to get the sequence right or with a delightful character death sequence, such as being crushed between the horns of a Triceratops or the jaws of a Tyrannosaurus. Not even young Jess is spared from meeting a demise.

There are many cases where a failed Quick Time Event won't immediately render a death screen though. Some will only drain the end Award level for each survival sequence.

If the player fails a QTE that results in death, the game will reload to a designated checkpoint where the sequence started, this will cause players to lose one award point.

The story of Jurassic Park: The Game is comprised of four episodes, each being 11 to 12 scenarios long. Each scenario takes place in a different location of the park. Some locations will be familiar to fans of the first Jurassic Park film, such as the Dennis Nedry car scene or the Park's Visitor Center, while other locations will be brand new to both new players and old fans.

The episode opens with Nima Cruz stumbling through the jungle, injured, clutching the Barbasol can and growing more and more delirious. Hired by BioSyn, she's been searching for Dennis Nedry and the can, unaware of the content or even about the kind of animals roaming the park. After surviving an onslaught of Dilophosauruses, she's then been attacked by a different kind of poisonous dinosaur called Troodon and there's a pack of them stalking her as she grows weaker with every step. This is where she's almost run over by a jeep driven by Gerry Harding, on his way back to the visitor's center with his teenage daughter Jess. Unaware of her reasons to be on the island, Gerry lifts her into the car and tries to stabilize her so she can receive treatment. When they make it back to the visitor's center, they enter it just in time to miss the sight of the helicopter carrying off the survivors from the motion picture.

With the T-rex still being around, they fight their way to save Nima and survive themselves. Though the situation naturally only gets worse as Nima's desperation to get the can to the North Harbor becomes more apparent. Only minutes after regaining consciousness, she draws a gun on the father and daughter.

Episode 2 introduces a new cast of characters. A mercenary rescue team has been hired by InGen to assess the situation of an ill-fated Bravo and recover the survivors of Jurassic Park. The team is led by Billy Yoder, his partner Oscar and their pilot, Daniel ‘D-Caf’ Cafaro. Upon arriving at the now ruined visitor center, and finding footage of what happened to Bravo team, the mercs continue on with their secondary objective, finding the remaining survivors.

Meanwhile in the jungle, Dr. Harding, Jessica and Nima make their way north to the coast, with the mercs close on their tale. They spot a decommissioned rollercoaster that can take them down the cliff face, and are attacked by a pack of Herrerasaurus'. The mercs arrive soon after the attack, save Gerry and Jessica, and apprehend Nima.

Upon returning to their helicopter, Billy and Oscar find no trace of D-Caf, only a blood trail and his helmet. Billy pilots the helicopter away just a T-Rex bursts through the jungle. Tension develops between Nima and Oscar during the flight to Dr. Laura Sorkin’s research station. Dr. Sorkin is another InGen employee who has remained on the island. There, she has been hard at work reversing the dinosaurs' Lysine deficiency gene. Dr. Harding strongly disapproves of this research, realizing its implications. While Dr.Sorkin and Jess administer the medicine into the Park's main water supply without Dr. Harding's knowledge, Nima suddenly escapes with the helicopter as the mercs try to take it back from her, and Dr. Sorkin, Jess, and Dr. Harding are attacked by Velociraptors, narrowly avoiding death.

Episode 3 opens with Nima and the mercs crashing the helicopter nearby the research station. As Dr. Harding, Jess and Dr. Sorkin flee from the raptors to the maintenance tunnels, Billy and Oscar rescue Nima from the wreckage. Oscar takes off after the group in the tunnels, while Billy questions Nima about the can of Barbasol. Upon discovering that the can contains dinosaur embryos worth millions of dollars, Billy agrees to work with Nima and split the earnings.

Back at the maintenance tunnels, Oscar stalks and kills a raptor while searching for the other group. After another close encounter with 3 other raptors, the two groups meet up to discuss further plans to leave the island. Dr. Sorkin suggests they first release the pressure system of the faulty geothermal power-plant to prevent catastrophic failure and they all agree to do so. While fixing the plant, the 3 raptors that fled return and Oscar sacrifices his life to save everyone else. Upon fleeing the approaching raptors, the remaining survivors take shelter in a utility closet, only to find the half dead body of the mercenary pilot D-Caf. Dr. Harding and Dr. Sorkin examine the ‘corpse’ to find that the Troodons have paralyzed him and have laid eggs in his abdomen. The episode ends with Yoder pulling his machete on Sorkin after overhearing that she's been studying them and have kept them out of the loop.

The final episode continues the group's flight from the Troodon, or rather their need to calm Yoder down. His entire team is now confirmed dead and Sorkin is directly responsible in his mind. It takes convincing from both Dr. Harding and Nima in order to calm the situation down and they escape the closet with the Troodon's on their tails. They realize the Troodon fear the dark and start using flares to break the pursuit, only to find themselves trapped in an intersection of four tunnels and no way of knowing which one to take. Though they figure it out by cross referencing the schematics, they are separated when being flooded with Troodons, Harding and Nima ending up on the surface while Sorkin, Yoder and Jess are forced to run through the dark corridors.

Fortunately they were the ones who picked the right tunnel and end up at the Marine Facility, the only location with a working phone. When Nima and Gerry catch up, they find out that the army is planning to bomb the island under a false pretense that the island is under biological contamination. Sorkin does not take this information kindly and leaves the group behind to call InGen herself and she then decides to hold the survivors hostage until they have called off the air strike. She even releases a living Mosasaurus into the waters, threatening to disrupt the naval ecosystem as it does not have the same limitations as the land based dinosaurs of not being able to swim the distance to Costa Rica.

Yoder breaks into the water sealed area only in time for the Mosasaurus to slam against the facility and sending Sorkin falling into the water, sealing her fate. Yoder then shows his true colors after calling InGen and confirming the air strike still has a green to go. He decides to take the embryos with him and leave the Hardings behind as a "tragic accident". Nima does not go along with this and is left behind together with them, not realizing Jess has stolen the can from him. Their only way is through the waters and despite being out of their element, they make their way to the harbor with scuba gear from the facility and plenty of luck.

At the harbor, they are attacked by Yoder and fights Nima over the possession of the can. It's interrupted by the T-rex entering the area and making short work of Yoder. The Hardings and Nima attempts to flee to the last boat and while Gerry distracts the T-rex, the women head to a walkway above. Unfortunately the T-rex crashes against the walkway, leaving Jess hanging from it and the Barbasol can flying onto the ground. The player can choose to pull Jess up or go for the can.

With the last survivors leaving the island on the small boat, they are accompanied with flying Pteranodons and the signature end credits song playing in the background.

References to the movies 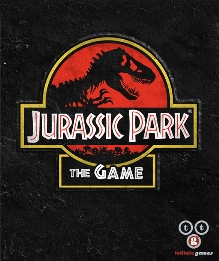