In a distant, chaotic future, cyborgs beat the crap out of each other in this multiplayer-heavy 3D beat 'em up from the developers of MadWorld and Bayonetta.
Xbox 360 PlayStation 3 PlayStation Network (PS3)

Anarchy Reigns (known in Japan as "Max Anarchy") is a 3D beat 'em up developed by PlatinumGames and published by Sega for the Xbox 360 and PlayStation 3 on January 8, 2013. Originally released in Japan on July 5, 2012, Anarchy Reigns features arena-based multiplayer for up to sixteen players in a variety of game modes (from standard deathmatch to a crazy sports-inspired mode influenced by the DeathBall mod for Unreal Tournament 2003 and Unreal Tournament 2004).

Set in a distant, chaotic future (where, due to terrorism and biological warfare, mankind would be extinct if not for the development of nan-machines and cybernetic organisms), the story is split into two overarching stories: the White Side (where players control Leonhardt "Leo" Victorion, a cybernetic agent of the Bureau of Public Safety and leader of the Strike One team) and the Black Side (where players control Jack Cayman, a cybernetic mercenary, or "Chaser"). Either way, they must hunt down Maximillian Caxton, the former leader of Strike One and a fugitive (who is believed to have murdered his wife).

Although the game's story is not related to PlatinumGames's 2009 action game MadWorld, Anarchy Reigns features playable characters from that game (including Jack Cayman as one of the main playable protagonists). The game also includes Bayonetta (from the 2010 action game Bayonetta) as a playable guest character.

Players play through both a White Side and Black Side campaign starring their respective characters. After both White and Black sides have been completed, a Red Side will unlock with the story's true ending where Leo and Jack team up to defeat a mutual superpowered enemy. While only Jack and Leo will be playable at the start, certain story missions let the player take control of other characters if they wish. A variety of optional and obligatory missions will be available alongside missions that progress the story. During battles The battlefield will change in real time during some fights -- bridges will collapse, natural disasters will occur, military bombardments will hit the area, and so on.

Going by the moniker Ice Queen, Sasha utilizes advanced technology to coat a set of levitating spikes with ice. She is a member of Strike-One with Leo and Nikolai, and a prodigy who was accepted into the unit after just two years in the military.

A ninja assassin in a stealth-tailored nano-machina suit, Zero fights with two swords: Onimaru and Juzumaru.

A cyborg with a massive, jet-powered hammer that doubles as a jetpack. Became a cyborg four years ago, when his human body was seriously injured. Currently runs a gang out of an abandoned foundry in Altambra and occasionally uses Baijiquan moves in battle.

An intelligent warrior/philosopher cyborg who fights with electric shocks, the current leader of Strike-One with his own moral code and sense of justice that clashes with Leo's.

An ex-Marine and Muay Thai specialist who is a member of Strike One with Sasha and Nikolai. He refuses to believe that Max actually killed his wife, and decides to bring him back alive for questioning.

A bounty-hunting cyborg with a large revolver in his right leg. Durga has a weird tiger-like demeanor and prefers the thrill of fighting to any material reward from his bounties.

A mercenary who died and had his mind transferred to a cybernetic body. Armed with drills and capable of transforming into a jet plane. Currently working with Durga.

A scientist who has developed a drug, "The Juice", that allows him to temporarily turn into a powerful mutant. Has a love of all things technology and runs a gang out of Port Valenda that helps him scavenge any new tech he can, regardless of whether the owner is still alive.

An ex-marine with a chainsaw attached to his right arm who currently works as a "Chaser," hunting down people and objects for the right price. Asked to track down Max by Max's daughter Jeannie, but also blames Max for his own daughter's death. Originally appeared in MadWorld.

A pimpin' black man who wields a pair of flaming gauntlets he stole from a "pyromaniac sex-freak" he took down with Jack at some point in the past. Later teams up with Jack at Amala's urging and the promise of a large bounty on Max's head. Originally appeared in MadWorld.

One of the Black Baron's consorts, wielding a spiked mace. Rarely talks. Originally appeared in MadWorld.

An Umbra witch who quadruple-wields guns and uses her hair for attacks. Originally appeared in Bayonetta. A guest star in this game due to both titles being Platinum Games property.

The former leader of Strike-One and a fugitive. Accidentally killed Jack's daughter during a hostage rescue situation and now has PTSD from the incident, currently being hunted by the Bureau of Public Security he once served with pride.

An old fighter who is trying to find mutants that killed his wife and child.

One of three sisters and part of a Chinatown triad gang. She uses fans that project flames. Originally appeared in MadWorld.

One of three sisters and part of a Chinatown triad gang. She fights with a staff that shoots ice.

One of three sisters and part of a Chinatown triad gang. She wields a set of nunchuks that discharge electricity.

The soundtrack to Anarchy Reigns was released on Amazon and iTunes on July 4th, 2012. 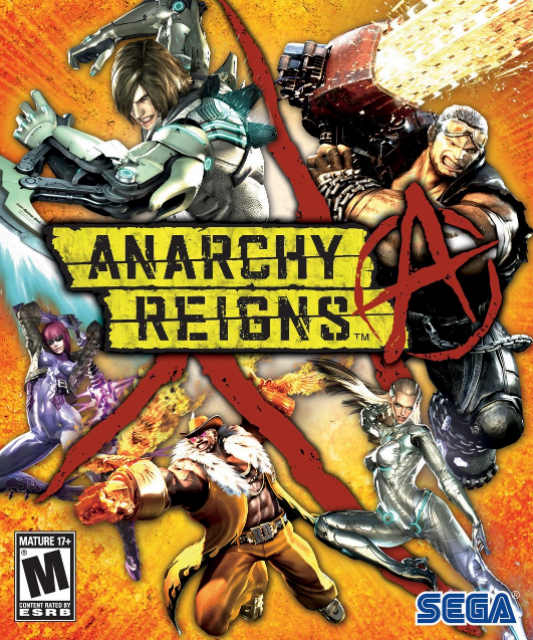