State of Decay is an ambitious zombie apocalypse survival game set in a current-day open world that asks "What would you do if it really happened?"
Xbox 360 Games Store

State of Decay is developer Undead Labs' ambitious zombie-survival open world game released on Xbox LIVE Arcade and PC. According to the developer's website, State of Decay is the embodiment of the “What if?” zombie apocalypse scenario. An updated version of the game titled "State of Decay: Year-One Survival Edition" was announced and scheduled for release on Xbox One and PC, both at retail and digitally.

State of Decay features an open game world with both indoor and outdoor environments.

James Phinney, Lead Designer of State of Decay, stated that the game will focus on player actions and the consequences of those actions on the world,

State of Decay was codenamed "Class3" and was announced in February 2011.

On August 18th, 2012 Undead Labs announced that State of Decay would use the CryEngine 3.

Class3 was officially name-changed to State of Decay on August 21st, 2012 and the first trailer was released on the YouTube channel of Undead Labs.

Undead Labs plans to develop an MMO-style property based around State of Decay in the future.

On the 17th June, 2013 Undead Labs announced that the sales of State of Decay had crossed over 500,000 copies making it one of the fastest-selling new IP's on XBLA and that due to this feat they would be developing a new Sandbox mode for the game which would remove all story elements and turn the game into a full and pure survival experience. The sandbox mode titled "Breakdown" was released on November 29th, 2013.

On September 20th, 2013 the game was released on PC via Steam Early Access and on November 5th it was officially released. 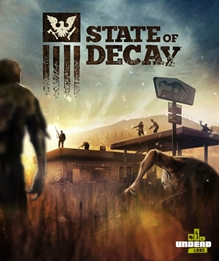