Strania: The Stella Machina (also known in Japan as Seisou Kouki Strania, which loosely translates to "Star Frost Steel Machine Strania") is a sci-fi vertical-scrolling mecha shoot-'em-up developed and published digitally by G.rev for the Xbox 360 on March 30, 2011. It was also released for arcades in Japan (digitally via NESiCAxLive for PC-based Taito Type X² hardware) on April 27, 2011.

Billed as an "80's-style Robot Action Shooting" game, Strania has players piloting the mecha "Stella Machina" (as either Shuichirou Touma for the blue mech or Yu Beatrix Barrett for the green mech) as they defend their homeworld of Strania from the invading Vower army (and destroy the giant particle weapon GUNROCK located in the Vower front base NS-032).

One of the key features of Strania is its weapon loadout system, in which each player's mech has three weapon slots (one for each arm and one for reserve). Players can cycle weapons between each weapon slot (with both arm weapons being actively used), can upgrade these weapons by collecting duplicates, and can level-up the grade of each weapon (for score boosting) through constant usage. The game also utilizes temporary invincibility as a mechanic (known as the O/D emergency protection system).

The game also includes a DLC add-on story (made standard in later releases) that puts players in control of a mecha in the invading Vower army, taking on Strania forces with a new stage progression and new weaponry.

Strania was later ported to the PC on November 24, 2015. An enhanced port was released for arcades (using PC-based exA-Arcadia hardware) on September 1, 2020 as Strania: The Stella Machina EX (or Seisou Kouki Strania EX), adding a new arranged soundtrack and a harder "Hell Mode" difficulty. 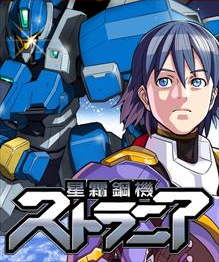