A third-person vehicular-based shooter where the player assumes control of toys such as tanks, planes, helicopters, or one of many wheeled vehicles.

You play as Andy, a young boy who apparently lives alone in a large house with several hundred toys.  Andy has forgotten his childhood toys for his newer fancy toys and other gadgets.  Huggy Bear, his old favorite toy, has formed an alliance with several other old favorites to destroy his new toys and kill Andy (don't deny their intentions, it is what they want).  Andy must round up his few loyal and his new ones to defeat the rebel toy army.

Toy Commander plays as a 3rd Person action game. You can fly planes, drive cars, pickup trucks, etc. The game has power-ups, these power ups improve weapon strength in pick-ups that are found typically in these type of games. You get missiles, bombs and mines with limited ammo and unlimited machine gun ammo for whenever you run out of ammo in any other gun. The vehicles in Toy Commander also have gas and health ratings, which over time have to be replenished. The gas, if it runs out, means that your vehicle moves slower, risking yourself when in a fire fight. And the health, when it runs out, ends in the player's vehicle being destroyed. The game also uses the Dreamcast vibration pack and also saves itself automatically if set up to an existing Dreamcast VMU.

In Toy Commander, the singleplayer mode pits the player in a series of missions in each room of the house. The missions range vary, from check point races, which normally have 3 or 4 laps to putting fires out on toy towns and houses. The objective of the single player is to do each of the missions as fast as possible to get the best time and beat the boss in each room. You can also beat each room without having to face the boss at the end, but the experience and difficulty is a lot different if you attempt to break records in order to fight bosses. The way you're shown your missions is quite primitive, with layers of text accompanied by an 3D animated boss, normally to present that they're saying the text.

The game doesn't use voices for this area or FMV sequences interestingly enough, and only presents hints to the objective via unusual camera angles and 5 second cut scenes at the beginning of each mission. Each mission you're given a different vehicle to use, normally to help with the task. Sometimes you're given multiple vehicles to make the missions easier to complete or as a necessity to complete the added objectives. It is a good idea that the player uses trial and error for these missions to find the quickest routes, enabling a faster way of completing the mission, depending on what it is.

For up to 4 players in a local splitscreen environment, you can choose which vehicle you want: be it a car, plane, or helicopter to compete in standard deathmatch and capture the flag games. There is also a Cat and Mouse mode, where vehicles must hit each other to get points. Otherwise though, the gameplay is exactly the same. You play in any of the rooms unlocked in story mode and you can pick up a wider array of items and pick-ups than in story mode also. Interestingly, every player has a small base where they can find health and gas upgrades conveniently. Players can also use these bases to change their vehicle when thought necessary, and unlike singleplayer, this doesn't mean simple switching between vehicles, but from a whole list of vehicles in the game. The multiplayer modes also allow players to sabotage each others bases and have turrets and anti-air craft machines that help them defeat the other players. These machine and turrets however can be shot just once and they'll be working on the other side instead. This is the only AI present in the multiplayer modes however.
Official Dreamcast Magazine Vol. 2, Vol. 9
Mad Tracks Fur Fighters Toy Racer Banjo-Kazooie: Nuts & Bolts Toy Soldiers Mister Mosquito 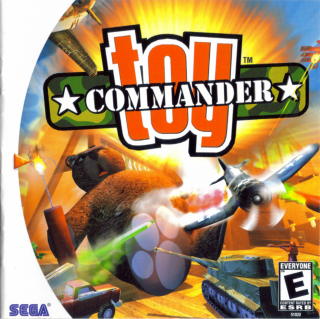