Shank 2 is a fast hitting, brutal 2D brawler with combo-based fighting, an updated combat system and online co-op and multiplayer to the 2010 predecessor.

A hack-and-slash platforming game with online co-op, Shank 2 sees the return of the titular Shank in this downloadable sequel to 2010's Shank, created by Jamie Cheng and his team at Klei Entertainment. With new weapons, smoother animation and greater use of the surrounding environment to kill enemies, players guide Shank on another quest for vengeance.

Shank makes his way into a South American country, looking for Linda, the woman who raised him in an orphanage in the country he left behind. Unfortunately, he arrives just in time to find the country in civil upheaval. Shank's ex-girlfriend Carina begs him to join the resistance movement against the country's new leader, Magnus. She claims he was elected to help the country drive out the illegal cartels, but instead used his wealth and his army to take over their functions.

Magnus heart is becoming weaker by the day, and the closest match for a transplant happens to be the woman that Shank is looking for. When his orphanage is burned down and Linda is taken prisoner, Shank finds himself forced to cut a path through Magnus' army with Carina in order to save Linda and perhaps liberate the country.

Though you can only play as Shank for most of the game (with the exception of one level for Carina) you can unlock additional characters to use in the story mode or the "Survival" co-op mode. There are 16 unlockable characters, each with their own strengths and weaknesses and using the same sets of weapons. With the exception of regular Shank, all of these have to be unlocked one way or another.

Note: these have limited ammo that can only be replenished at crate drops in the levels, but cause an explosion that damages enemies in a small area-of-effect. These are the same for Shank and Carina. 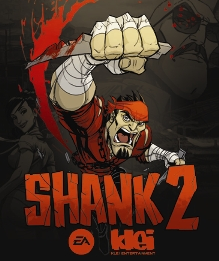