A game featuring space battles that is a mix between MOBA and RTS.

Stellar Impact is a strategy game developed by Headup Games and published by Meridian 4 for the PC platform.

Players control 1 capital ship in a fleet of 2-6 capital ships and numerous escort ships. Fleets of escorts are occasionally spawned and travel along flight lanes, trying to break through the enemy escorts & turrets and obliterate their base. The players, in addition to helping them along, try to kill the enemy fleet and capture several resource nodes scattered around the map to generate Command Points, Research, and use Warps. "Terrain" also plays a big factor: nebulas, asteroids, and stars cover the battlefield and can slow, hide, or damage ships.

After each match, a player earns XP and items for the capital ship type they were piloting, which improves that ship type. XP & items can't be exchanged between different ships.

For Stellar Impact three extra ships can be bought as DLC: 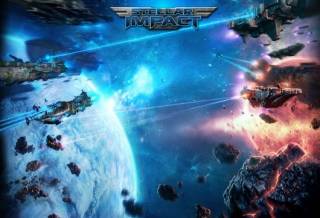