Oddworld: Munch's Oddysee is the third game in the Oddworld series and the second in the Oddworld Quintology. It brings a new playable character (Munch), 3D visuals and a bunch of new enemies and locations.
Game Boy Advance

Oddworld: Munch's Oddysee starts off with a video of Munch searching for other members of his species ( Gabbits). We discover Munch is the last of his kind, as the species is sought after for their lungs and gabbiar. Munch is captured during his search and taken to a lab where he gets a sonar device implanted onto his head. While the Vykkers who operated on him momentarily leave the lab, Munch realizes that he can use his new device to free a group of Fuzzles that are being held captive. Fuzzles appear to be cute, but can be ferocious. So Munch escapes the lab with the help of the Fuzzles. We then go to Abe who gets instructions from the Almighty Raisin that he needs find Munch and help him out. The two eventually find each other and the adventure kicks off.

In Munch's Oddysee, the player switches between Abe and Munch to solve puzzles throughout the game. Only certain creatures will listen to a particular character, and their gameplay style is different. Munch is more useful in the water and moves across land slowly, while Abe is much more suited for land. You often have to combine their abilities to progress. Munch's Oddysee differs from previous installments in that the world is completely 3D, and this is also the first time that you also switch between two characters.

Abe - He must save Oddworld and rescue his friends called Mudokons. He has the power to possess any of his enemies, and let them do his dirty work. Abe is not someone to mess with. He also aids Munch by throwing him to safety because Munch isn’t much of a jumper. Abe can also toss his Mudokon comrades to safety!

Munch - He is sadly the last of the Gabbit species, and things got worse for Munch. The Vykkers performed a horrible surgery on him and attached a headport into his skull. Even though the Gabbit has one leg and a headport attached to his head, he helps out and frees his new Fuzzle friends, and zaps his way out of that prison in the sky. He can swim and go places where Abe cannot swim.

Shaman - These Mudokons provide information on what is waiting for you up ahead.

Scrubs - These Mudokons are slaves to work for the industrialists, and they are too shy to stand up for themselves. Let them aid you on your adventure by letting them pull levers or intervene in Chant Circles. Let them be free once you are done with them by leading them to rescue portals.

Natives - There are still surviving Mudokons that are free and not in the clutches of the industrialists. They struggle to survive, and fight to stay far away from the industrialists. Have them help you by letting them do what the Scrubs also do for you, and also let them fight for you in battle. For once, there are creatures that you do not have to save, and that is these Mudokon Natives.

Fuzzles - These hot-tempered, yet cute, little creatures have a soft spot for Munch. They are friendly when they want to be friendly, but they don’t want to be treated badly. They aid Munch by attacking enemies. Do not let these little creatures die before your very eyes and you better not get them upset or you’ll regret it!

Scrabs - These stupid enemies are like cows and they want to eat you. They will not be a difficult to handle if you just gather them up in their pens.

Paramites - These disgusting creatures also want to eat you, and you must avoid them at all costs.

Meeps - The friendliest creatures of the wildlife, and you don’t have to worry about these odd looking sheep-like creatures. You can be a Meep herder in no time if you can round these shy creatures up!

Snoozer - One of the most useful and only friend in the industrialized world is a snoozer. Have Munch control this sucker and zap every enemy that is within reach.

Slogs - You got to move quickly away from these creatures because they can put a hurt on you! Slogs are like dogs to Sligs; however, they aren’t loyal as a dog is. If they aren’t fed, they will eat anything!

Interns - Interns are assistants to the Vykkers, and they will do anything to move on up in the industrialized world. Some are unarmed, and some are not; also, some are armored, and some are not. Stay away or try and kill these enemies if you can.

Vykkers - These are the scientists that like to experiment on creatures that are living. Some even carry saws and some hold guns! Just like sligs, they can be armed with a gun. Do your best to beat these suckers, because they are really tough!

Glukkon -They are of the highest authority in the industrialized world, and the real enemies of Oddworld. They don’t have to live rough, and they have all the money and power. You must do your best to flush their money down the toilet, and help one Glukkon Pud to become a Glukkon Glockstar.

Oddworld: Munch's Oddysee received generally favorable reviews. GameSpot gave it a 7.9, IGN gave it a 7.4, and EGM gave it an average of 9/10 earning it a Gold award.

On June 7th 2011, Just Add Water also announced a version of the game for the PlayStation Vita via Twitter. Saves are set to be cross-platform with the PS3 using the cloud. It, like the HD remake of Stranger's Wrath will have updated graphics. 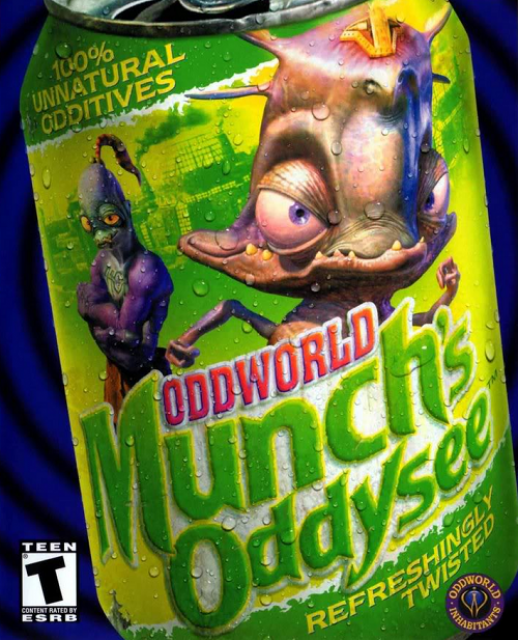