LittleBigPlanet Karting is a kart racing game being developed by United Front Games with some collaboration from Media Molecule and SCE Studios San Diego. Opposite to the previous LBP games which used side scrolling platforming as the groundwork for the gameplay, this title uses full 3D space for racing and creating.

LBP Karting was discretely revealed at the Destination PlayStation 2012 event. An image leaked out via Twitter by a Future Shop official account, and it was swiftly deleted. But a few days later the official PlayStation Twitter account confirmed the game's existence, also via Twitter.

The following month on March 22nd, LittleBigPlanet Karting was officially announced on the PlayStation Blog along with the release of a trailer. United Front Games was announced as the game's developer with the game's release set for sometime in 2012.

The start of May held the game's first major press event, with UNF design directo r William Ho and SCE Senior Producer Kyle Zundel among the few talking about the game. This event helped detail more of the features present in the game along with a large amount of non-trailer game footage.

Returning is the Pod computer, the standard interface in the LBP franchise that allows you and an optional four other cohorts to make yourself stand out from the pack. Customization of Sackboy is still the same great variety that you're used to with costumes (either import or on disc) from past PlayStation 3 titles available to use. Kart customization has said to be an extension to the way Sackboy does it with with the ability to change the entire structure of a kart through part sets as well as being able to use stickers. They can also range from motorcycles, to tanks, to bees or even planting pots with wheels. Style combinations can also be made, such as a box lunch kart with a Sackboy as a piece of sushi.

While racing seems similar to UFG's previous racing title Modnation Racers, it has many more unique LBP twists. Drifting into corners isn't a new concept, but one of the new boost abilities is an Autopilot that transforms your kart into a jet powered boxing glove capable of punching your way through anybody. Another is Fast-Forward which takes the style of Rewind and Pause from LBP create mode, and applies it to racing by skipping you forward in the track.

The racing feel, while still a kart racer, has roots in it's platforming origins. Power-ups from the previous titles like the Jetpack and the Grappling Hook, can not only help you make your way through jumps and pits, in can also help you find alternate pathways through the track.

Weapons are there to help and hurt such as grenades and EMPs, but also many missile types can be uniquely customizable by users with categories like straight and seeking shots to multi-missile attacks. Of course all these weapons can be fired backwards as a means to defend yourself from being constantly blue-shelled.

Also collectable are Craftworld's famous point and prize bubbles which add an extra incentive then just first place finishes (although those help). In addition to being collected during a race, you can also collect prizes from achievements in the game such as highest number of racer take-downs. Prizes range like they did in previous games as stickers or objects that you can use in your customization or creation.

Familiar track settings can be found while racing such as The Gardens and The Wedding from LittleBigPlanet along with Victoria's Lab from LBP2.

Along with the standard race modes, the game features battle modes, waypoint races, score attacks, treasure-hunts, boss battles, and more, all able to be hand-tailored by creators.

Creation possibilities you would expect from a LittleBigPlanet game are here in full force. Karting uses a fully 3D space free from layer restrictions. You can utilize Materials, Objects, and Stickers imported from the previous games to create fantastic tracks to race and battle on. An example are the King & Queen and the bird on a chain from The Gardens of LBP1.

You can also change the rules of play to create a wider variety of challenges, such as changing the camera into LBP's original 2D perspective and even tossing eggs into a hole to score. The weapons Sackboy can wield can also be user defined. Using these abilities, you can fully flesh out the game types available and invent-able in the game.

Media Molecule is implementing your Karting creations onto their LBP.me service. Letting users search for what they want when not playing the game, and queue them up to play when they log in on their PS3. Whether this will only be tracks or not hasn't been revealed.

While no date has been made for the game, the announcement mentioned the release set for 2012. Retailers also have the game set for the Q4 2012 range, which is most-likely placeholder.

In standard fashion, and just like the previous game, pre-order content is being advertized. It is currently unknown if this content is retailer-specific, but it has happened in the past. It has also not been said if Karting costumes will be usable in LBP2.

Retailers GameStop and Amazon have a pre-order only Kevin Butler character pack consisting of Kevin Butler styled hair, shirt with a tie, pants, shoes, a watch and a V.P. mug, as well as an Executive Golf Kart to use when racing. 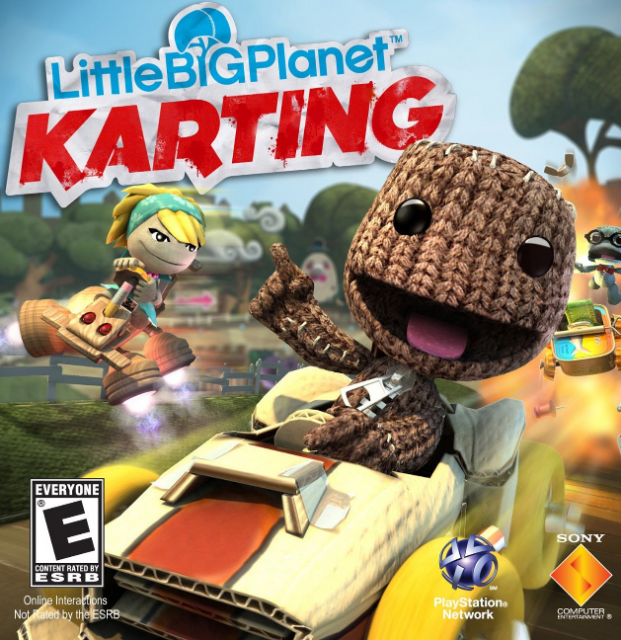