Space Megaforce is another game in the massive vertical scrolling shoot 'em up genre. Also called Super Aleste in Europe and Japan, Space Megaforce gives players groups of enemies to fight through, 8 different weapons that can be powered up, and a whole lot of explosions.

Space Megaforce, or Super Aleste as it is known in Europe and Japan, is a Compile shoot 'em up and the first Super Nintendo entry in the Aleste series.

The player can collect up to eight different types of weapons, each of which can be powered up a maximum of six times. Each of these power levels causes each weapon to act differently, from causing more damage to shooting extra bullets and missiles. The player powers up a weapon by collecting small colored spheres. Orange spheres add towards a level up, but as the weapon gets stronger it takes more orange spheres to go up the next level. There are also rarer green spheres that will instantly level up the weapon.

The 8 different weapons are obtained by collecting a circle with a number on it. From Weapon 1 to 8, the names are: Multiple Shot, Laser, Multi-Directional Shot, Missile, Circle, Power Shot, Scatter and Sprite. Smart bombs are also included in the game, killing almost everything on screen when activated.

The player's health is based on their weapon level. When the player's ship is hit, it loses 4 levels of power, so the player would need a weapon level of 5 or above to survive a hit from projectiles. The player cannot be damaged by hitting walls or obstacles - only enemies. It is possible to be crushed between two obstacles if caught between them, however.

The Japanese version has a few additional features. These include an actual conclusion to the story, a menu screen with more options and super deformed art on the menu and game over screen's background.

Electronic Gaming Monthly awarded it their "Editor's Choice Gold Award and the scores: 8,9,9,9. From the review, "...the best shooter ever made for any home system to date! Where other games struggle to get six levels in a game, Toho does twelve! No slowdown, great Mode 7 and Decent music make this an almost perfect game". 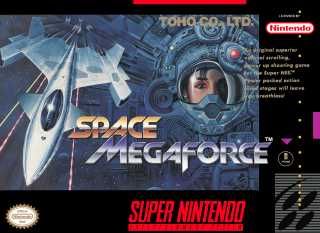