The Suffering is a psychological horror action game set in a prison.
PlayStation 2

A psychological horror-themed shooter set in a prison. The Suffering follows inmate Torque as he tries to escape from the prison amidst chaos brought about from the chaos that erupts throughout the prison.

It was developed by Surreal Software and published by Midway. Unlike most other horror games of the time, The Suffering is a lot more action-oriented. It features apparitions and hallucinations as well as creatures designed by Stan Winston Studios.

The game features a morality certain where players can choose to kill or save anyone they encounter, which affects the ending. Creatures are based on execution styles that took place on Carnate Island. The game has a lot of reference to other horror movies and some songs.

Originally the game was called Unspeakable but later in development, it was changed to The Suffering.

Torque is accused of killing his family, beating his wife to death, drowning one son in the bathtub and throwing the other out of the window. Sentenced to death, the game begins with Torque being escorted to his cell in the Abbott State Penitentiary on Carnate Island. He can't remember anything from the day he killed his family. Ten minutes in his cell and creatures starts to come out and kills everyone they can. After his cell door gets destroyed and Torque manages to find a sharp weapon to defend himself, and finds himself as one of the few still alive in his Cell block. He must now find a way to get off the island by using any help he can or be consumed by the island.

During his experience, Torque will meet Dr. Killjoy who appears with the help of film projectors. He is determined to help Torque with his "gift" even though his method are unorthodox. Another ghost, named Horace, will instead ask for Torque's help but will do what he can to make sure that Torque is not consumed by Carnate Island. Hermes, who is a former executioner for Abbott, sees a lot in common with himself and Torque but will give him a hard time to "prove" himself that Torque truly wants to get out of Carnate. Torque will also see apparitions of his family: Carmen, Cory and Malcom. He struggles to finds out if he really killed his family.

The Suffering has three ending: Good, Neutral and Bad. It is determined by how many allies you kill, save or ignore.

Depending on which ending you get, the "true" events of Torque's family's murders are different. In the bad ending, you learn how he did actually go insane and kill his family. In the neutral ending, you learn that his wife's death was an accident during an argument and that his sons died afterwards. In the good ending, you see that it was a group of masked men that did it, framing Torque for the murders. The good ending is the canonical ending, leading into the events of The Suffering: Ties that Bind.

There are two main archives that give you various pieces of background information on the island itself and the monsters that roam it.

Clem is an inmate on Carnate Island who records all of the monsters and the possible origins of the creatures. The player meets Clem at one point, but this has no effect on the journal.

Consuela is the wife of the CO Ernesto who lives in the town on Carnate Island. The town is very small and is built on a puritan village. The town only exists because of the distance and lack of ferry service to the mainland. Because there is very little to do on the island, Consuela starts writing a journal, detailing the locations on the island. Consuela is never seen in the game, but Ernesto is seen twice. The first time when he is escorting Torque to his cell, and the second when he is searching for Consuela and their daughters.

There are several different weapons all over Carnate Island.

The shiv is a weapon improvised by prisoners. It is good for slashing, however, it should only be used for small groups. It can also be used to destroy wooden obstacles, to save ammo. It is the first weapon the player finds.

The revolver is a pistol that holds six shots. It deals a decent amount of damage and has a fast reload speed. After finding another pistol the player can dual-wield two revolvers,

doubling the rate of fire at the cost of some accuracy. The revolver is the most common weapon in the game, and all guards carry it.

The tommy gun is a machine gun. Good for mowing down big groups of enemies. It has a large clip and an average reloading speed. Ammo is not overly plentiful, but definitely not rare.

The pump action shotgun is the best firearm for close combat. It can kill most enemies with one hit, if the player is close enough, and is good at knocking enemies over. Distance is not the shotgun's friend. Has a long reload time.

TNT is a throw able explosive. It is best used against large groups of enemies, or just large enemies.

A Molotov Cocktail is a rag soaked in some form of flammable liquid in a glass bottle. They are useful for groups of enemies.

Shrapnel Grenade Shrapnel grenades are grenades that have a large blast radius. They are best used against large groups of enemies.

A regular fire axe used for emergencies... involving fires presumably. It is much stronger than the shiv..

The flamethrower is not a weapon you can find, instead you must build it yourself from parts found on the island. Can dispose of most enemies quickly.

This is a secret weapon found only in one place in the game. It resembles a chicken and shoots eggs which kill any non-boss enemy in the game in just one hit. However, more ammo for this weapon can never be found.

These are some of the enemies you can encounter on Carnate Island.

Slayers are humanoid creatures with blades for arms and legs. Their heads are attached to their bodies through a strange contraption. Clem speculates that the slayers are manifestations of execution by decapitation. Slayers move with the grace of a ballet dancer but are as deadly as an expert swordsmen. They can preform backflips and launch themselves towards a target, besides their normal slashing attacks. They can also crawl on ceilings and walls. They appear in many different sizes and in two different variants. The first kind are usually human sized and the colour white. The second kind is the colour brown and are much larger. The second kind does a lot more damage, is faster and more durable.

Slayers are the only creatures affected by light. A spotlight will set them ablaze, and a flashlight can temporarily stun them. Because of their blade legs, they make a clanking sound when they move. They are the most common enemy.

Mainliners are small imp like creatures with syringes all along their back. Clem speculates that they are the manifestation of execution by lethal injection. Mainliners attack either by throwing syringes, or jumping on victims and sticking them with needles. The latter attack cannot be avoided, but the mainliner can be thrown off again. They have the ability to transform into a pool of blood and reappear in any body of liquid nearby.

When they die they release a cloud of poison that disappears after some time.

If Torque is hit by a syringe while in insanity mode he will revert back to normal Torque.

Marksmen are large humanoid creatures that are blindfolded and have five

rifles on their back like a turret. Clem believes that they are the reincarnation of those killed at the hands of firing squads. They appear out of the ground, tied to a post which then disappears. When they attack, they kneel and then use the turret on their back to either fire five bullets, or a continuous stream of bullets. They are slow due to their size.

Noosemen are skinless humans with no lower body and a noose around their neck that suddenly appear from pools of blood on the ceiling. Clem thinks there is a connection between the Noosemen and the legend of inmates who lynched and skinned five COs after a quarry accident where several inmates were killed. The Noosemen come down from the pools of blood and grab Torque, biting him until he can free himself. After Torque is free the Nooseman will hang for a second or two and is open to attack. They respawn infinitely.

A Burrower is a human in some sort of sack that burrows under ground and surfaces to attack their prey. They are bound in chains and when they burrow they leave a visible trail on the ground. Clem believes that they are the manifestations of the death of being buried alive, like the inmates who were trapped in the quarry accident. They have two attacks both using the chains attached to their bodies. The first is a simple spin, making the chains hit anything in the way, for the second they slam their chains towards Torque.

Fersters are large very obese men, with scars and stitches all over their body and a cage on their head. Clem believes that they are the reincarnation of slave traders, who left their cargo of slaves to be eaten alive by rats after they crashed on Carnate Island. Festers have a large mace, which they swing around as their primary attack. The mace is so heavy that it knocks people over when it hits the ground. In the bowels of the Festers live many rats, and sometimes the Fester will open its stomach to let the rats attack Torque. The rats will crawl out themselves when the Fester dies. The rats always attack in swarms, and they explode when they touch Torque. Festers are invulnerable to bullets, and the only thing that can kill them is explosives or bladed weapons, like the shiv or fire axe. Using molotov cocktails is quite effective, as it not only kills the fester, but also the rats inside the Fester's belly.

Infernas have two forms. One is a small girl dressed in a white puritan robe, and the other a flaming creature that moves at incredible speeds. Clem is sure that there is a connection between these creatures and the three puritan girls who made witchcraft accusations in the late 1600s, leading to the fiery death of 11 people. The first form has no attack, but the second is very dangerous. When the Infernas move they leave behind a flaming trail, and they sometimes stop to unleash a large explosion, at which point they are vulnerable to attack. When they are dead, they leave behind a pile of ash, that must be destroyed before the Infernas can resurrect themselves.

In September 2008, the PC version of The Suffering was made into freeware; the full game could legally be downloaded here.

Some point after acquiring Midway WB retained the rights to The Suffering and stopped the offering of it for free on the internet or otherwise. It is no longer considered legal to download it and it is not "freeware". 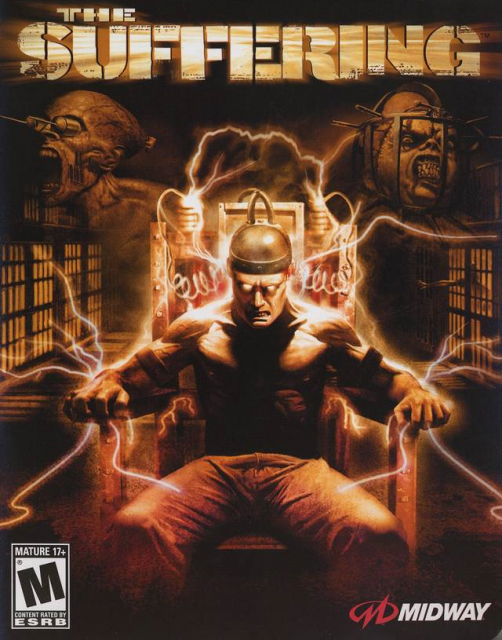