Liberation is a Assassin's Creed game for the Playstation Vita, starring a Creole female main character named Aveline de Grandpré, who joins up with the Assassins to search for the truth behind her mother's disappearance. An HD version will be released digitally for PS3, PC, and Xbox 360.
Xbox 360 Games Store PlayStation Network (PS3)

Assassin's Creed III: Liberation stars a female assassin by the name of Aveline de Grandpré who is of French & African heritage. The story takes place during 1765 and 1780 in the period between the end of the French and Indian war up to the middle of the American Revolution. The game will feature multiplayer "tailored specifically to the Vita experience."

Although Liberation was labelled as a companion piece to Assassin's Creed III, this was done purely for marketing purposes, and the game is very deliberately written to be completely unrelated to the previous games in the franchise. As such, the player will not be exploring the ancestral memories of Desmond Miles. Instead the game will feature a historical simulation that has been altered by the Templars to make themselves look like the good guys. By identifying and assassinating people who have been added by the Templars, the player can then disrupt the simulation and uncover the true course of events.

Almost a year after the game's Vita release, on Sept. 10th 2013, an HD version of the game was announced for digital platforms on Xbox 360, Playstation 3, and PC. This version will include 15 new missions tailored specifically to Aveline's three personas (Assassin, Lady, and Slave).

This HD version was also included with Assassin's Creed III Remastered, which was later released on PlayStation 4, Xbox One, and PC in 2019.

Aveline de Grandpré is a byproduct of a wealthy French father and a free African slave during the 18th century in New Orleans. At an early age, Aveline was separated from her mother while chasing a chicken and never saw her again, while narrowly escaping a slave auction from which she was rescued by her mentor, escaped slave Agaté. Years later, she is found to be defending herself from a group of guards and returns to her father's Bruce Wayne-esque manor secretly through the second floor to change into more appropriate garb.

Her family is partially responsible for naval trading in the Caribbean and the east coast of America during Revolutionary times between 1765 and 1780, but usually leaves the business in the hands of her friend and ally Gerald Blanc.

Throughout the game, Aveline traverses through the port town of New Orleans, its swampy, alligator-filled Bayou, and the ruins of Chichen Itza to protect the Prophecy Disk and find the identity of "The Company Man" and stop him once and for all.

Liberation's gameplay is very similar to that of the other games in the franchise, placing a light emphasis on stealth and moving through the city unnoticed and accomplishing your task as quickly, and quietly should the player choose to be, as possible. A new addition to the franchise is the use of personas to accomplish certain tasks through charm, brute force, or under the guise of low social standing, among other things.

Not unlike other big franchise games coming to the PlayStation Vita, Assassin's Creed III: Liberation uses the handheld's numerous touchscreens and its gyroscope to their full advantage by the inclusion of extremely forced-in creative minigames for activities such as:

Assassin's Creed III: Liberation will be bundled with a PS Vita game system at launch for a limited time. The bundle retails for $249.99 (US) and includes:

The soundtrack was composed by Winifred Phillips, and released in October 2012 by Ubiosoft Music. 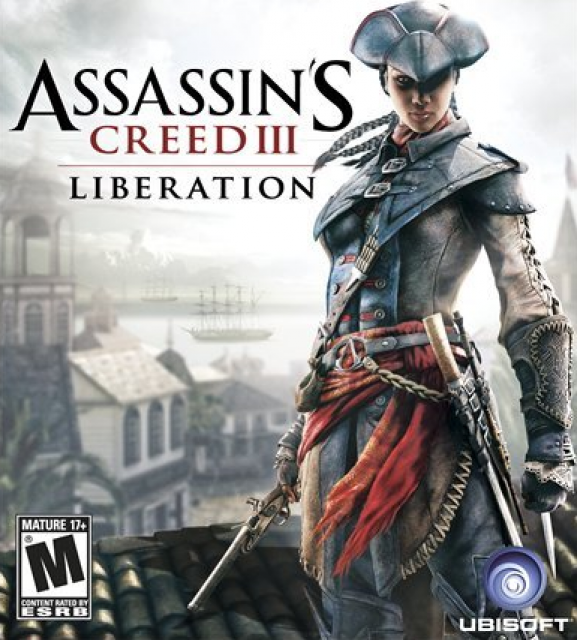