A multiplayer PC game that blends combat from an MMO PvP with the perspective of an FPS. Indie game developed in Unreal Engine 3.

Forge is an online multiplayer game that combines fast-paced action, typically found in competitive shooters, with the tactical, team-based player-vs-player gameplay found in MMO'. Forge seeks to eliminate the need to grind like in traditional MMOs and, instead, focuses on skill-based combat and gameplay. The game has a low monetary barrier ($15-$20 at release) and includes free DLC updates.

What sets Forge apart from most MMOs is that the game is played from a first person perspective. Forge is not an open-world MMO. It makes extensive use of shared environments such as hub worlds to group players for instanced battles and events.

Forge exploits the rarely used first-person perspective in an attempt to create a more personal combat experience. Contrary to most MMOs, Forge is not focused on level grinding or loot farming. The game also departs modern MMOs in its core design philosophy. Instead of long lists of skills, Forge focuses on only a handful per class and requires precise timing. This mean timing is key instead of having a large hot bar with numerous key bindings.

Lead developer Tim Alvis, while interviewing with Gamespy, said he seeks to lower the complexity of class skills while increasing the effectiveness of positioning, blocking, dodging, and movement, hence the influence of competitive shooters.

Every time you earn a medal in Forge PVP combat, you earn experience points. The best way to level up is to play well and have your team win the game as a result. Team-based winning has a greater impact on the speed of leveling than any personal factor. This is designed to eliminate single player kill/death ratios from mattering as much and instead nurtures a sense of teamwork.

There are 99 levels to unlock. Each level grants you one of five (Armor Points, Customization Points, Ability Focus, Title, and Skin, with one exception which is an emote you unlock at level 92) possible rewards. The rewards are set per level and given out at a predictable pace. For instance, you gain a focus every 4th level until there are no focuses that remain to unlock. You unlock a Customization Point every 8 levels. You unlock an Armor Point very frequently, sometimes two levels in a row with only a few level gaps. The levels will not be exponentially difficult to obtain.

Customization points present a character with the ability to take away stats from one area to increase another. Stats can only be moved when there are points available to spend.

The options are in a triangle between; Armor, Speed and Max Resources (Energy/Mana). Every Customization Point represents 40 armor, 1.5% base speed, or 5 maximum resources. So to gain 80 armor, you would need to give up 0%-3.0% Speed and/or 0-10 Maximum Resources.

14 points are unlocked over 99 levels.

Armor Points are given more frequently than customization points. These allow you to shift points around to modify your strength defensively outside of how we have it configured by default. Every Armor Point allows you to shift 3 points in armor from one category to another.

You are given 45 of these points over 99 levels, allowing you to shift 135 armor from one category to another.

Forge is a PVP only game that pits 8-16 players against each other in PVP combat.

The look of your character is determined by a skin gear slot. This has no impact on stats in any way. It’s fully cosmetic. They have no stats attached. The equipment that does have stats attached will drop from regular play, be available to purchase from experience points, or be earned by reaching a particular rating. The equipment comes in three quality levels, Common, Rare and Relic:

Classes in Forge are divided into common archetypes that include damage, healing, and tanking.

Assassins are masters of deception and deadly combatants. Armed with poisons, daggers, and the ability to shift into the realm of shadow, they are feared like no other. Assassins rely on deception to gain the upper hand on opponents. While they are skilled fighters, their light armor grants them little defense against the coordinated attacks of their enemies, making them unable to fight in the open for too long.

Pathfinders are sentinels of the forest. They’ve mastered the bow and laying of traps, and use both to keep their enemies from ever getting close. Their deadly accuracy and knowledge of nature allows them to use arrows to control the flow of battle. Pathfinders wear medium armor, but are light on their feet. The best defense a Pathfinder has is their ability to keep the enemy at a distance through the clever use of traps and specialized shots.

Pyromancers are born of lords and nobles. Through their endless and shamelessly expensive devotion to the craft of magic, they are able to manipulate the destructive element of fire, using it to burn and destroy their enemies. The concentration required to use such abilities forces them to often remain stationary while using their most powerful attacks. While their armor is enchanted to protect against their own flame, it offers little protection against all else. Their best defense is staying away from the heart of battle and fighting from the edge.

Shaman have an arsenal of abilities at their disposal designed to restore the health or otherwise support their allies in battle. With minimal offensive tools at their disposal, they rely on their allies to clear the field of enemies. Though they’re not direct combatants themselves, they are sturdy enough to survive in the heart of battle.

The Warden is a protector of men, a fearless moving citadel around which their allies can become nearly indestructible. The Warden believes that protection is a greater honor than destruction, focusing their martial training on the shielding of allies. Carrying massive shields, they and those they are protecting are difficult to bring to their knees. The Warden wears heavy armor, weighing them down slightly, but offering them tremendous protection.

The Dire Bear is an avatar of Aesir, Bear Mother. Fighting alongside Wardens when summoned, they present a menacing combination.

The Fire Elemental is an avatar of Ragnyr the Destroyer and the companion of the Pyromancer. The Fire Elemental is a vicious, fire laden dragon spawn capable of destroying an enemy on its own. Be wary of these creatures, as they can be called upon to erupt in a shower of flame by their chosen.

The Panther, and avatar of Inua, a god worshiped only by the Iskime, is a companion of the Assassin. The two shift in and out of the shadows together, terrorizing their enemies with little notice. The Panther can be called upon to prevent an enemy from fleeing, a common occurrence.

The Revenant are the risen spirits of a Shaman’s ancestor, used by the Shaman as conduits to the powers of Ymil himself. As companion to the Shaman, when summoned they are able to protect the very ground your allies walk on.

Forge includes four maps at launch, which will be added to through additional content updates.

Capital Siege is built to provide a claustrophobic experience in most areas, all the while keeping an eye on the quality of line of site to ensure ranged units continue to shine. With three major openings that provide the shortest routes between relic rooms as well, there are plenty of opportunities for battles to go through choke points into more open areas and back again. Careful use of the underground sewage system or working through the network of buildings that comprise the map will provide relic carriers their best routes.

The Field of Ruins is designed to provide players a feeling of being vulnerable for many of the areas, while providing specific sections of the map where line of site is heavily broken that comprise the bulk of the path between the two relic rooms. As the only map with a single major elevation at all points (though it does shift depending on where you are), the map promises to have more frequent conflict in larger numbers than average.

A constant balance, outside of the river shallows, of openness and interrupted line of site. A mixture of elevations, two of which with constant line of sight between them, forces players to think in three dimensions at all times. Relics are held at two camps on either edge of the forest. Learn to make use of the upper walkways or the ancient tunnels that go under the river itself, and you’ll have taken your first step to mastering this map.

A classic design. Two opposing, identical fortresses, with multiple levels and pathways between the two relic rooms contained within. Players familiar with the FPS genre will find themselves right at home. Exposed areas are abundant between the two temples, but rare within.

A malicious being named The Devourer has swallowed the great pantheon of gods. Seeking escape, the trapped gods have deceived great warriors, zealous adherents and placed them on a faceless world called FORGE, designed sacrifice the weakest of these warriors in order to grow their own power. Choosing one of five unique warrior classes, the player must battle head-to-head with other players in a bid to free their god from the clutches of The Devourer. Armed with a set of powerful and unique abilities as well as a powerful and deadly ally, each warrior must overcome the varied challenges of FORGE where every kill is a sacrifice and every sacrifice brings them one step closer to freedom. 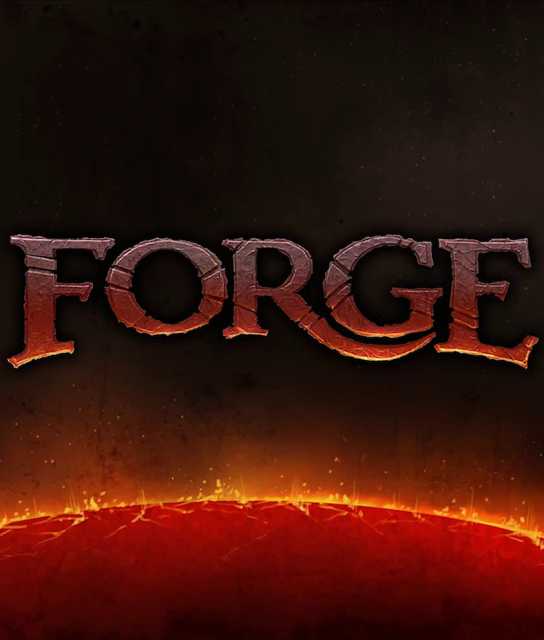