Formerly called The War Z, this infamous clone of the popular ARMA II mod "DayZ" is best known for the many controversies surrounding its launch, subsequent removal from Steam, and the unapologetic stance of its developers.

Infestation: Survivor Stories (formerly The War Z) is a survival game developed by Hammerpoint Interactive. It takes place in Colorado during a zombie apocalypse. The game is intentionally similar to the ARMA II mod DayZ. Many features of DayZ exist in Infestation, including permadeath. Infestation also introduces new features of its own, including player-created safehouses, a user-created quest system (with the potential for griefing) and weapon customization.

The game was removed from Steam on December 19, 2012, due to many complaints that advertised features such as skill trees and multiple maps were missing.

As of February 12th, 2013 several patches have been released that have expanded the game. These improvements have made it more team and co-op friendly, adding the ability to create clans and form small groups on the game servers and allow players to see each other on the map.

The advertised-but-absent RPG elements are slowly being added. Leveling up works on a skill tree system of assigning points. All new player-characters begin as civilians. Players that engage in PvP earn points toward the bandit tree, while PvE players earn points toward lawmen.

Players are able to rent servers, as in DayZ.

The game began to draw criticism even before it was released; besides the similarities to DayZ, another point of controversy was that the game's terms and conditions text was identical to that of League of Legends. Despite the outcry, the game was released through Steam on December 18, 2012.

Shortly after release, many buyers were dissatisfied and demanded a refund, complaining that a number of game features cited in advertisements were not present. Such missing features included:

In addition, screenshots on the game's Steam page depicted a level of graphical quality not present in the released game

Initially, Hammerpoint Interactive was not receptive to these complaints, stating that online games are never truly done. However, the game was subsequently pulled from Steam, with Valve issuing the following statement:

From time to time a mistake can be made and one was made by prematurely issuing a copy of War Z for sale via Steam. We apologize for this and have temporary removed the sale offering of the title until we have time to work with the developer and have confidence in a new build. Those who purchase the game and wish to continue playing it via Steam may do so. Those who purchased the title via Steam and are unhappy with what they received may seek a refund by creating a ticket at our support site here.

The game includes melee weapons and firearms of many different types. All weapons spawn in the world with a random rarity level.

On June 19, 2013, Hammerpoint Interactive announced that the game would be renamed Infestation: Survivor Stories. While this was actually done to distance themselves from their own infamous launch, and the obvious comparisons to DayZ, the official claim by the developers was that the title "The War Z" caused confusion and trademark issues with the book/movie World War Z. 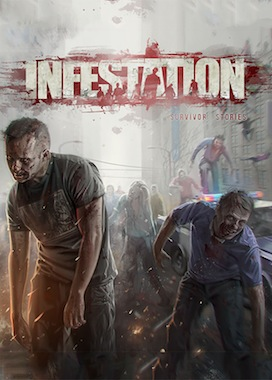