A single-screen puzzle-platformer for arcades starring the titular duo from Caveman Ninja. It is based on the studio's earlier Tumblepop and Diet GoGo games.

Joe & Mac Returns is a comedic prehistoric puzzle-platformer developed and released by Data East for arcades in 1994.

A sequel to the studio's earlier single-screen platformers Tumble Pop and Diet Go Go, Joe & Mac Returns is based on the earlier 1991 arcade game Caveman Ninja, starring the titular cavemen duo (Joe and Mac). Players stun enemies with their clubs and then bag them by running over them. While holding a bagged enemy, players can collect additional stunned enemies for a larger bag and then throw the bag (which rolls through the ground as a projectile, destroying and damaging enemies).

The game later received a digitally re-release by Flying Tiger Entertainment for the Nintendo Switch on March 14, 2019, as part of the Johnny Turbo's Arcade series. 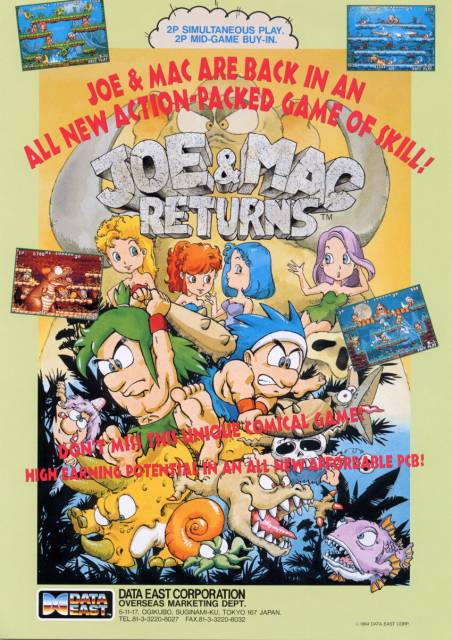