Based on the popular Tomy/Hasbro toy license, Zoids: Chuuou Tairiku no Tatakai is an RPG/Shooter hybrid developed for the Famicom by the notorious Micronics.

Zoids, an early line of robotic toys that resembled dinosaurs and other animals, were produced by Tomy and were a chief rival of the Transformers toys of Hasbro. Tomy did not yet have the means to develop video games based on their products, so publishing duties went to Toshiba-EMI while developers-for-hire Micronics worked on the game itself.

Zoids: Chuuou Tairiku no Tatakai ("Zoids: Battle of the Central Continent") inexplicably resembles Dragon Quest, complete with medieval castles and a fantasy world that just so happens to have giant mechanical T-Rexes and triceratops walking around it. It's only when the player enters battles with random encounters (which are visible on the world map) that the game shows its true colors as a first-person panoramic mecha shooter in the vein of Battlezone or Battle Clash. Players are advised to check the statistics of the enemy mechas and those of their own before entering the fray, moving the cursor to the left or right until the crosshairs is targeting an enemy and then destroying them with sustained fire. 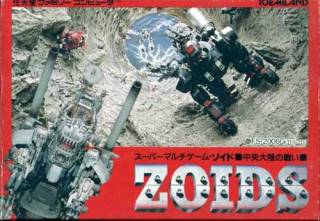