Take to the skies with the Rebellion's finest fliers, the legendary Rogue Squadron, and complete all manner of aerial combat missions in the fight against the deadly Empire.

Released on December 17 1998, Star Wars: Rogue Squadron is the first in a series of space combat games for Nintendo platforms. Originally released on the Nintendo 64 and PC, the game was developed by Factor 5 and was published by LucasArts.

The game is known for its arcade style approach to starship dogfights, with Factor 5 taking influence from the original Star Wars cockpit arcade game. The game also has little resemblance to the novels for which the series is based, opting for Luke Skywalker to be the main character, rather than Wedge Antilles , the protagonist of the novels. The game also features full voice audio for character dialogue, a rarity for the Nintendo 64 at the time.

Luke, as mentioned, is the main character of Rogue Squadron, the only other playable character being Wedge during a bonus mission of the game. Hobbie and Janson also make an appearance as pilots for the Rebellion, as seen in The Empire Strikes Back. Crix Madine, a Rebel Alliance General by the time of Return of the Jedi, also plays a part in the game, as the player must assist his defection from the Galactic Empire. This incident occurs on Corellia, Han Solo's homeworld, and as expected, the space pirate makes a last minute appearance to help his friend Luke, similar to the end of A New Hope.

Wedge plays a pivotal role as well, often being Luke's wing man, and keeping him updated on any threats or mission updates. General Rieekan, from Empire, serves as the commanding Rebel in constant communication with the flight team. He gives orders to Rogue Squadron, and often calls them back to base if the player fails the mission. Another important defection from the Imperials occurs during the course of Rogue Squdron.

Kasan Moor, a pilot in the deadly 128th Imperial Squadron, acts upon her doubts of the Empire, eventually becoming a valuable aide to the Rebel cause. Her knowledge of hidden Imperial bases helps Rogue Squadron carry out several sabotage missions, crippling the Empire's forces. It is also hinted that Luke and Kasan are fond of each other, as Kasan is grateful for escaping Imperial influence, and Luke is able to see the good in her. The main adversary of the game is Moff Seerdon, bearing all of the characteristics of a typical evil Imperial officer. He gives commands to the Imperial Fighters, and spouts Imperial rhetoric reminiscent of the films to the opposing Rebels.

Characters are not individually seen on screen, apart from their biographies in the game's menu. Rather, the game portrays its characters through the ships and vehicles that each one flies. Moff Seerdon is nearly always represented by a Tyderium Shuttle, and Kasan's defection is visualized in the transition from piloting a TIE Interceptor to an X-Wing. General Rieekan often rides in larger transport crafts, and Luke occupies the starfighter in the player's control.

The story of Rogue Squadron takes place between Episode IV and Episode V.

The Rebellion is still making an effort to stay united, and resist Imperial takeover, while at the same time engaging in rescue and liberation missions.

As the Rogue Squadron help General Madine and Kasan defect, Wedge is caught in his downed Y-Wing by Imperial forces on a mission from which the Rebels are forced to flee. Luke and Kasan launch a rescue attempt, allowing the Rebels to infiltrate the prisons of Kessel and free dozens of war prisoners.

Moff Seerdon poses a threat to the recent Rebel successes, with each following Imperial defeat striking anger in the evil commander. Sederdon is finally defeated during his raid on civilian bacta facilities, where Luke and the rest of Rogue Squadron protect the innocent inhabitants and successfully take down Seerdon's shuttle.

Many of the locations in Rogue Squadron appear to be counterparts to the Original Trilogy's many planets. Each planet also consists of a single environment, as in all desert, all forest, or mostly water. For example, Barkesh shares many traits with Yavin IV, the Rebel base in A New Hope.

Both planets are covered in jungle, and share similar ancient architecture. Talloran is a gas planet, with a floating city that looks very similar to Cloud City, and in fact Kasan comments on how she is reminded by Bespin during the mission.

Fest is an all ice world, with Imperial Walkers as the empire's main force, echoing the planet Hoth from Empire. Chandrilla also borrows its architecture heavily from conceptual paintings of Alderaan, a planet unseen on film until 2005 in Revenge of the Sith. Hoth and Beggar's Canyon on Tatooine make appearances as bonus levels, as well as the Death Star's equatorial trench.

Most of the Rebel and Imperial starfighters in the game remain true to their Star Wars canon traits. For example, the X-Wing is able to shift between attack position and cruise position by locking the S-Foils. The A-Wing is the fastest ship in the fleet, yet also the weakest in terms of shielding, as witnessed in Return of the Jedi; both attributes are similar to the TIE Interceptor, as also seen in Jedi. Used primarily for bombing and escort missions, the rock-solid Y-Wing sees plenty of use in both offensive and defensive missions; the ship's built in Ion Cannons are particularly helpful for disabling important enemy targets. Often employed on air-to-ground missions and quick assaults, the Snowspeeder is a useful craft for dealing with the formidable AT-AT walkers, as seen in The Empire Strikes Back. An expanded universe ship, the V-Wing makes an appearance as a flyable starfighter during the bonus mission featuring Wedge.

Rogue Squadron features atmospheric battles only, as true space combat was not introduced until the following Factor 5 game,Battle for Naboo.

Rogue Squadron features a medal system, where players are graded on their performance during a mission. Factors such as enemies killed, Rebels spared, and blaster hit ratio are taken into consideration before awarding the player either a bronze, silver, or gold medal. Medal count effects the player's status within the Rebel Alliance (i.e, recruit, commander, general) and also unlocks up to three bonus missions. This encourages the player to replay missions and score within the medal requirements.

Factor 5 famously included the Naboo Starfighter during development nearly six months before the release of The Phantom Menace. The code to unveil the ship remained largely unknown until Factor 5 released instructions to the two step unlocking process close to the premier of Phantom Menace.

for infinite lives, and even a music and starship gallery can be entered, allowing the player to casually view full 3D views of each starship in the game. Another interesting Easter egg in the game was the ability to pilot a flying 1969 Buick Electra 225, after inputting a specific code. Players can also unlock the Millennium Falcon. 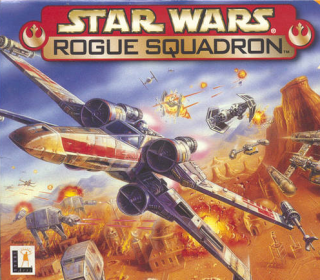