An early run & gun shooter designed by Hiroshi Ishikawa in the summer of 1983 and published by Enix in October 1983.

A fairly revolutionary forgotten gem that featured non-mirrored, separately drawn sprites for the left-and-right walking animations, run & gun shooter gameplay, a diverse range of enemies, fully destructible environments, a convincing physics engine (where a rocket will send the player character flying back slightly, or falling down too far will kill them), and a plethora of weapons (for its time), allowing the player to carry three or more weapons.

Brain Breaker is a spiritual successor to this game, designed by the same creator Hiroshi Ishikawa in 1985. The gameplay of Kagirinaki Tatakai is also a precursor to later run & gun shooters, such as Hover Attack and Thexder. 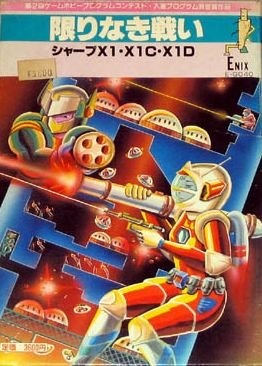