Mission Against Terror (M.A.T.) is a free to play online FPS, developed by KingSoft and published by Wicked Interactive / Suba Games.

Mission Against Terror is a free-to-play, first-person shooter (FPS) where two opposing teams must complete their given objectives within a time limit, using real-world weapons in a variety of maps and locales against players from around the world. Players can join clans, team up with friends against computer-controlled bots, and even fight a Dragon Emperor.

Mission Against Terror feels and plays like Counter-Strike 1.6, pitting two teams against each other in various game modes with a constrained time limit. Players are not restricted to playing as specific military archetypes (such as "Terrorist" or "Counter-Terrorist") and are often found wearing silly costumes and dancing to regain their health. 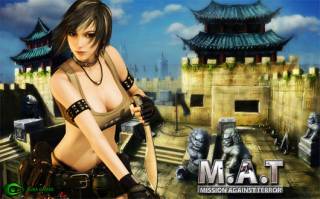