A side-scrolling shooter-platformer by Bootdisk Revolution.

Bleed is a side-scrolling platformer game and features a would-be heroine named Wryn as she attempts to prove herself the greatest video game hero.

Bleed was originally released for the XBLA platform in 2012 before it was released on the now-defunct Desura service the subsequent year, with its Steam release following a few months later.

In the 21st century, heroes of the world were loved and praised. At the height of this glorification, shrines were built to them and a Hall of Heroes was constructed, inducting only the most famous of heroes.

One hundred years later, no new heroes have been invited in and the last six heroes have become corrupt and live off their previous fame. Wryn, the main character, plans to change this. She believes it's time the world meets a new hero - a real hero. In order to gather global recognition as the true hero of the 22nd century, she sets off on a journey to kill the six heroes that were inducted into the Hall. Armed with her dual pistols, a rocket launcher, and ungodly amounts of ammunition, the player must guide her through this journey.

However, after defeating all six heroes, a stranger dares to steal the credit for her amazing feats! As he broadcasts his declaration of victory and induction into the Hall of Heroes, the world is confused and upset at him, so when Wryn shows up to kill him too, people around the globe align themselves with her.

Story mode is the basic style of gameplay and allows the player, or players, to select which level they would like to play from the levels they've unlocked. There are four difficulty levels in Story Mode (Easy, Normal, Hard, and Very Hard) and are selected after choosing the level.

Arcade Mode turns the campaign into a rogue-like game, where the player is allowed only a single life. Scores are determined by performance and progression, then recorded onto leaderboards. Co-op games will not be eligible for posting on leaderboards. All four difficulties are enabled in Arcade Mode. Players are also given the option to adjust the amount of health they start with, to add to the challenge.

Challenge Mode allows players to fight up to three bosses or mini-bosses at one time. Players are only able to select opponents they have already defeated, and so, must progress in Story Mode to unlock new enemies. Players may also select the same opponent multiple times. The option to choose a map the player has beaten or the default arena is also offered, with more levels being unlocked as Story Mode nears completion.

Bleed offers local co-op to add one other player.

Bleed has full controller support on PC, enabling the use of game console controllers or joysticks.

Through various feats, players can unlock the following: 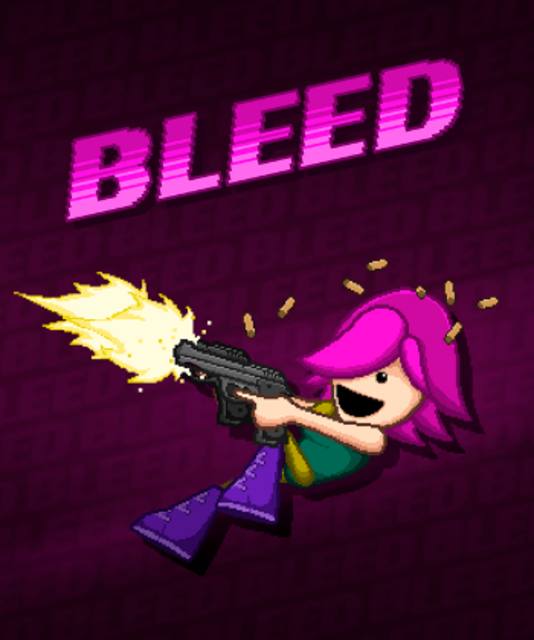