Puyo Puyo is a puzzle game in which the player matches four or more "Puyo" of the same color together. This game is the precursor to an identically-titled arcade release.

Puyo Puyo is the first entry of Compile's Puyo Puyo series. It was released on the MSX and Famicom Disk System on October 25, 1991; the FDS version was published by Tokuma Shoten as part of their "Famimaga Disk" line of games. The FDS version would later be released on a Famicom cart in 1993. Puyo Puyo would be succeeded by a much more popular arcade game of the same name.

Puyo Puyo contains three modes: Endless, Mission, and Verses. In Endless Mode, players match Puyo until the top of their well is filled. If the player chooses, either a giant 2x2 green Puyo or Carbucle will periodically help the player clear space on their board. Mission mode gives the player several challenges to complete, such as clearing a set amount of Puyo or clearing all Puyo of a certain color. Verses mode allows players to battle each other. 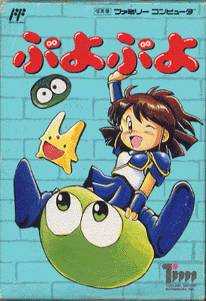