Magic Sword is a 2D action side-scroller with a fantasy theme. The hero and his chosen accomplice must battle their way through a wizard's tower in a lust for monster slaying and loot.

The player controls an unnamed character - referred to as the "brave one" - through 51 levels to the top of the Dragon's Tower. At the top of the tower, the dark lord Drokmar possesses the Black Orb. The goal is to traverse the tower and stop Drokmar's plan to rule the world with the power of the magic crystal. There are two endings to the game - the ending depends on whether the player embraces or destroys the Black Orb.

The game is primarily a hack and slash sidescroller but also includes platforming in the form of parallel paths of travel and avoiding ground hazards. As the player progresses, they'll encounter new swords that cause increased damage and have different magic attacks. Most swords are acquired immediately after a boss battle at the end of certain levels. Chests and doors can be opened to reveal items and allies respectively. However, some chests and doors are traps that release enemies or other hazards. Doors also require keys to open, which are collected and stored by the player. Only one ally can travel with the player character at a time, and has its own health and level associated with it. Allies level up with items or by passing over the same type of ally again. The game also features a level select option, allowing the player to skip to level 5, 9, 13, 22, 26, 30, or 33.

Most levels have at least one hidden chest. A secret chest is invisible unless the player character has the Thief ally, crystal ball item, or they strike it with their sword to open it. Some levels have secret doors that warp the player one or more floors ahead when used. These doors can never be seen until activated.

The SNES version of the game removed some enemies from the game and moves one of the bosses to a different floor. The version of Magic Sword in Final Fight: Double Impact follows the arcade version.

Last two floors or until replaced. 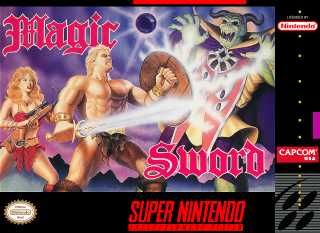