The sequel to the classic Super Nintendo RPG, Chrono Cross expanded the franchise to alternate universes, adopted a turn-based combat system, and had dozens of playable characters.

Chrono Cross is the sequel to Chrono Trigger, which was released for the Super Nintendo in 1995. ChronoCross takes the series in a new direction as it expands the predecessor's focus on time travel for a story about alternate universes, as well as debuting a new turn-based combat system, a new art style and a very enlarged new cast of 45 playable characters. The game also includes several series staple features such the New Game Plus and series hallmark multiple endings. Released for the PlayStation in 2000, Chrono Cross received wide critical and commercial success, and went on to join the PlayStation's Greatest Hits library.

Chrono Cross follows a boy named Serge, and takes place in a tropical archipelago called El Nido. After a freak occurrence, Serge finds himself in an alternate dimension in which he has been dead for 10 years. While searching for the answer behind his death, Serge runs into a young girl, a thief named Kid. Together they set out on a journey to solve the questions surrounding Serge's death, as well as hunt down Kid's nemesis, a cat-man named Lynx, and retrieve an ancient artifact known as the Frozen Flame. After chasing Lynx for some time, Lynx gets the upper hand. He uses another artifact called the Dragon's Tear to switch bodies with Serge, and banish him to a strange realm known as the Temporal Vortex. Serge eventually escapes the Temporal Vortex, and begins searching for a way to get his body back from Lynx, which leads him to an area called the Dead Sea. There Serge does find the Frozen Flame, but it is guarded by a man named Miguel. After Serge defeats Miguel, the entity known as FATE destroys the Dead Sea to protect the Frozen Flame. Serge barely escapes with the help of the legendary Dragons. He is also able to retrieve his body with the aid of the Dragons, and then heads to a research facility called Chronopolis. There, Serge defeats both Lynx and FATE, which allows the Dragons to swoop in and take the Frozen Flame. It is then that the Dragons merge to form the ancient Dragon God and raise the massive structure known as Terra Tower, thus becoming the new primary villain(s).

Upon traveling to Terra Tower, Serge meets a prophet named Belthasar (the same Prophet of Time from Chrono Trigger). Belthasar divulges much information to Serge, including the history of El Nido, Chronopolis, and the Dragon God. He also informs Serge that a girl named Schala (the princess of the Kingdom of Zeal from Chrono Trigger) has been trapped in a place called the Darkness Beyond Time along with a terrible creature called Lavos, who was the primary villain from Chrono Trigger. It seems their presence together has caused Schala and Lavos to begin merging, and the resulting creature (later called the Time Devourer) would be capable of destroying all spacetime. Belthasar also talks about the role of Serge and Kid in all of this. He reveals that he created Kid as a clone of Schala, and set in motion all of the events of the game that have brought Serge to this point. He calls this plan Project Kid, and states that its purpose will soon be revealed. With this new information in hand, Serge defeats the Dragon God at the top of Terra Tower, then heads back to the point where he first encountered the dimensional split. There he finds apparitions of Crono, Marle, and Lucca- some of the main protagonists from Chrono Trigger. They tell Serge that the purpose of Project Kid was indeed to free Schala from the Time Devourer. Serge moves forward, and defeats the Time Devourer. By using the mysterious seventh element known as the Chrono Cross, Serge is also able to free Schala. Schala thanks Serge, and returns him to his home. Serge forgets the whole adventure upon returning home.

Chrono Cross' story plays heavily off the idea of the parallel dimensions found in the game. For a large portion of the game, the player can travel between the two dimensions, and will frequently encounter the same character in each dimension. Often times the two versions of a character will be very different, which reveals one of the game's major themes- every choice someone makes creates once future and destroys another simultaneously. The two dimensions represent two parallel worlds that are almost completely different, due to the diverging choices its inhabitants have made over the years, even though it is technically the same world. Chrono Cross also contains numerous references to its predecessor, Chrono Trigger. Many are obvious, such as the appearance of important characters such as Crono, Marle, Lucca, Belthasar, Schala, and Lavos. Other characters are mentioned in passing, such as Robo. Others still are referenced in a more subtle way- Frog and Magus are represented by other characters who are not at all related to them, but share likenesses. Events in Chrono Trigger are also referenced on occasion, and the ruins found in Chrono Trigger's futuristic era can even be found in the Dead Sea. Various items, such as the Masamune, also make a reappearance.

Similar to Chrono Trigger, Cross Cross has no random encounters. Enemies are visible from the overworld, and a battle is only initiated if the player makes contact with the monster. Chrono Cross’ battles revolve around the six elements in the game, which are designated by the six colors: Red, Blue, Green, Yellow, White, and Black. Chrono Cross' magical system is centered around these elements, as each spell or item in the game is labeled under an element. Characters have a certain number of slots in which they can equip elements, and thus use them in battle. These six elements occur in three pairs of opposed types: Red/Blue, Green/Yellow, and White/Black. Every character and monster in the game has an innate element, and elemental attacks deal more damage to a character or monster of an opposing element. For example, a blue elemental spell will deal extra damage to a character whose innate element is red, and vice versa. Also, the game keeps track of the three most recently used elements, which is displayed in an upper corner under the label "Field Effect". Once the field effect becomes one color (that is, three elements of the same color are cast in a row), then elements of that color will receive a power boost. Summon spells, the ultimate attacks in the game, can only be cast if the "Field Effect" is entirely of the proper color.

Another big feature in Chrono Cross' battles is the stamina bar. Characters and monsters start each battle with 7 stamina. Characters have multiple levels of attack, consuming various amounts of stamina depending on the quality of attack. A character cannot act if his or her stamina falls below 1, and they will lose their turn until their stamina refills (which happens naturally over the course of other character's turns). Also, elements cannot be used until a character has landed a number of blows on an enemy, and they also require stamina to use. Thus, battles in Chrono Cross require players to balance the use of physical and magical attacks, while keeping his or her stamina in check. Also, a standard element can only be used once per battle. Characters do not gain experience points upon completing battles in Chrono Cross. Instead, participating characters receive a small boost to their stats. After defeating a boss, the player is rewarded with a larger stat boost to all characters. Also, weapons and armor are not purchased in shops as in most RPGs. Instead, players collect base materials from monsters they defeat (or from treasure chests), and must take these items to a blacksmith, who can forge them into gear.

Finally, Chrono Cross offers a New Game mode upon completion of the main story. Similar to Chrono Trigger's New Game , this mode allows the player to start the game over while keeping everything he or she has already collected- including items, elements, equipment, and party members and their stat upgrades. In fact, there are a few points in the game which require the player to choose one party member over another, and carrying party members over via a New Game is the only way to obtain all 45 playable characters in a single play of the game. Also similar to Chrono Trigger, Chrono Cross offers multiple endings, and includes double and triple tech abilities between some characters.

Composed by Yasunori Mitsuda, Chrono Cross' soundtrack has received much praise, and is considered by many to be one of the best video game soundtracks ever composed. The official soundtrack contains 67 tracks spanning across 3 disks. In total, it contains roughly 3 hours of music. Though the majority of the music is new and fresh, there are a few tracks which subtly recall some themes from Chrono Trigger, though they too sound fresh due to how they've been reconfigured. Play! A Video Game Symphony has done multiple Chrono Trigger/Chrono Cross shows. Time's Scar is always included as an opener. 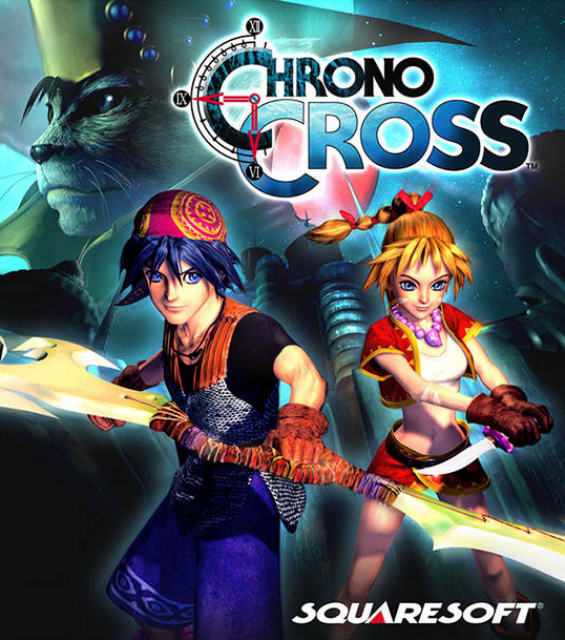