In this version the player assumes the role of James Bond Jr. In the first level Bond Jr. is tasked with finding 5 missiles in 45 minutes in an underground complex. Each time he reaches a bomb, he must disarm it via a tile mini game where the player must rearrange the tiles to match the picture the game is showing.

In level two, Bond Jr. must unlock 6 safes in an underground enemy base that's full of enemies and invisible doors. Once the safe has been found, the player has nine tries to find the 4 digit code that randomly changes each time they fail. The player must do all this under 25 minutes.

James Bond Jr. has bombs to blow up certain walls and a trusty gun to shoot bad guys with. To switch weapons the player must press the select button. Bond Jr. can also jump.

This version was in color as opposed to its NES version. It was a mix of shooting and platforming. In the first level, the player must pilot a helicopter equipped with missiles and bombs while avoiding enemy missiles and trees. The second level takes place in a Mayan temple. This level is known for being particularly frustrating as it is full of snakes and Bond can only kick or punch up and thus not hit the enemies. Bond Jr. can mesmerize the snakes with a flute or kill them with grenades.

The game alternates vehicle and exploration missions. Level three is another helicopter mission, level four takes place in the sewers where Bond Jr. must avoid radioactive pools, spikes and mini waves. He can pick up gadgets like a gas mask and grenades that freezes water. The level ends with a boss fight against a submarine.

Level 5 has Bond Jr. piloting a spaceship in a level that looks a lot like Super R-Type. In level 6, he arrives at the enemy's space base where he must avoid turrets and other other such obstacles. He must then defeat the final boss and the game ends like this:

"You'll pay for this James Bond Jr.!", to which Bond answers, "No problem, scum lord! Keep the change!". 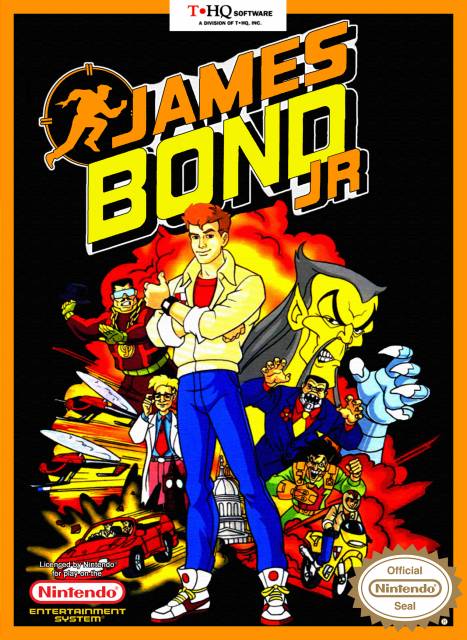