An RPG spin-off of Konami's Ganbare Goemon series, where Goemon has to solve the mystery of his missing pipe.

Ganbare Goemon Gaiden: Kieta Ougon Kiseru ("Do Your Best Goemon Side-Story: The Missing Golden Pipe") is a turn-based RPG and gaiden/spin-off game in the Ganbare Goemon franchise, known overseas as Mystical Ninja (or Mystical Ninja Starring Goemon). Like most Goemon games, Kieta Ougon Kiseru was never localized internationally, though it did receive a fan translation.

The thrust of the game is that Goemon's treasured golden pipe goes missing one day, possibly stolen, and Goemon sets out to find it along with his frequent companion Ebisumaru. Goemon meets many other allies along the way as he travels the width and breadth of Japan to find his pipe. Gameplay involves exploring towns and talking to the locals, and turn-based combat with bandits, yokai, and other foes.

Kieta Ougon Kiseru is notable in Ganbare Goemon lore for being the debut of the kunoichi Yae, who joins the party in the game. She continues to pop up in future games, often as a playable character. The other playable character in this game is Koban, a cat. 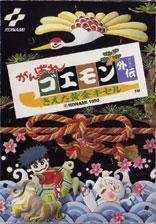