An Arcade-Only Action Platformer released by Tecmo in 1992. You play as a team of cacti (Saboten) that run around throwing bombs at enemies inside a house.

A fast and frantic, Fixed-Screen Platformer, Saboten Bombers features 100 stages comprised of floating platforms akin to those seen in games such as Tumble Pop and Snow Bros. The background imagery in each level suggests that the game takes place in and around a domestic home, featuring stages in a kitchen, a bathroom, a bedroom, a livingroom, a library and several other locations.

In Saboten Bombers you play as one of two cactuses-with-arms, the Saboten Bombers, fighting against a legion of sentient vegetables, giant insects, and various nonsensical creatures. As one of the Saboten you're are capable of running, jumping and throwing bombs. The bombs you throw are incredibly bouncy, ricocheting off of every surface for several seconds before detonating. As such, throwing out too many bombs at once can prove quite dangerous, as you can hurt yourself with your own attacks. It's also possible to set your bombs down on the ground so that enemies walk into them.

When a bomb hits an enemy, they will become stuck to the bomb, travelling with it until it explodes. Multiple enemies can become stuck to a single bomb. There are also enemies that require more than one bomb explosion to kill. Some enemies can also throw bombs, not all of which bounce.

Simply running into an enemy does not hurt you at all. You can even push the enemies around or jump on their heads, temporarily stunning them. On the flipside, enemies can temporarily stun you as well.

In each level you can collect various food items for additional points. These food items include carrots, apples, bell peppers, grapes, bananas, watermelons, cakes, and radishes among other things.

There are also power-ups that increase the power of your bomb attacks and power-downs with various negative effects. These items only appear when you manage to kill multiple enemies with a single bomb. 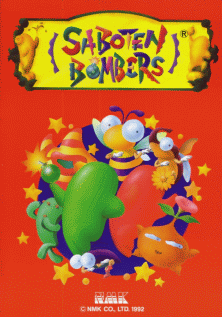