Phantasy Star II is a sci-fi fantasy RPG developed by Sega for the Genesis/Mega Drive. Released in 1989, it is the second game in the Phantasy Star series, the first RPG on the Genesis, and the first 16-bit RPG released outside of Japan. Taking advantage of a new 6 megabit cartridge format, Phantasy Star II was also the largest home console game ever released in its day. The full Japanese title can be translated as Phantasy Star II: The End of the Lost Age. The game's story takes place 1000 years after the events of the first Phantasy Star, and follows the protagonist Rolf and his seven companions as they seek out the true nature of evil forces awakening in the Algol solar system.

The game originally came packaged with a 110-page player's guide, which included full maps of all of the dungeons and a basic walkthrough of the entire game.

The story begins with Rolf having a nightmare. In this nightmare he watches a battle between a young girl and a demon. Just as the demon is about to strike the girl Rolf awakes...and our story begins.

Rolf is an agent for the commander of Mota, a planet in the Algo system that was originally a barren world, but was terraformed into a verdant world by the AI Mother Brain. Recently, however, the climate control system, Climatrol, has stopped working and vicious monsters have begun swarming out of the Biolab. The commander sends Rolf out to get to the bottom of these problems. Rolf starts out accompanied by Nei, a unique half-human, half-biomonster who is an outcast from society. Along Rolf's journey, he is joined by other companions who just show up at his home in Paseo.

On the way to the Biolab, Rolf's progress is impeded by the bandit, Darum, who is robbing and murdering travelers outside the city of Paseo. Rolf learns that Darum adopted his evil ways only after his daughter was kidnapped; Darum is trying to steal enough money to pay her ransom. Rolf rescues Darum's daughter and brings her back to him, but Darum is so consumed by his evil lifestyle that he does not recognize her before mortally striking her down to rob her. As soon as he realizes that he has mistakenly slain his daughter, he blows himself up.

At the Biolab, Rolf discovers that massive amounts of energy are being redirected from Climatrol to the Biolab where it is radically mutating the experiments, making the biomonsters. Rolf proceeds to Climatrol, seeking the root cause of this.

At Climatrol, Rolf discovers that it is all sabotage perpetrated by a being called Neifirst, Nei's evil other half who is resentful of her creation as a rejected experiement by the Motans. Nei and Neifirst split from the same being, with Nei choosing forgiveness, Neifirst choosing vengeance, but their life forces are still intertwined as one. Nei fights Neifirst to stop her, but Neifirst kills Nei easily. Rolf destroys Neifirst, but in so doing, inextricably destroys what is left of Nei, meaning she cannot be revived back in town and will now be dead forever.

With Neifirst gone, all of the energy that she was controlling away from Climatrol is unleashed and Climatrol explodes. The pent up rain pours into the lake surrounding Paseo, which threatens to overflow and flood catastrophically.

Rolf reports back to the commander, where he learns that the government of Palma, another planet in the Algol system, has accused Rolf and his companions of being responsible for the problems with Mother Brain. Rather than wait to be arrested, Rolf volunteers to help with the flood crisis by going and opening the floodgates at the four dams that connect the lake to the ocean.

After much hard work, Rolf succeeds in opening the dams and lake drains safely. Immediately afterwards, the government catches up to Rolf and captures him. Rolf is imprisoned on the satellite Gaira where he is to wait for his execution. Shackled by plasma rings, Rolf and his companions flee captivity, running from their captors in battle, when suddenly a large explosion occurs. Upon checking a control panel, Rolf sees that Gaira is now on a collision course with Palma, but before he can do anything more, another explosion knocks him unconscious.

Rolf awakens on a pirate ship operated by Tyler. Rolf was rescued at the last moment, but Palma was obliterated by Gaira's impact. Tyler drops off Rolf at Paseo and tells him that there is someone who can do things that even Mother Brain cannot on the planet Dezo. With the the commander's blessing, Rolf flies to Dezo.

After exhaustively exploring Dezo, Rolf finally finds the secluded Esper Mansion where the ancient magician Lutz (Noah in the English version of Phantasy Star I) has been waiting for him. Lutz explains that Rolf is the last descendant of Alis who defeated the Dark Force long ago, and it is Rolf's destiny to live up to that legacy. After saving Rolf's life when he was 10 years old in the accident that killed his parents, Lutz knew Rolf would return to fulfill his destiny. Lutz tells Rolf to gather the 8 legendary Nei weapons and then return to learn the ultimate truth.

After tremendous effort scouring the great hidden dungeons of Dezo, Rolf returns to Lutz armed with all 8 Nei weapons. Lutz tells of the events connecting Phantasy Star I and II. For a time, there was peace as the Algol people harmoniously worked and provided for one another, desiring nothing more. Then, Mother Brain was brought in and the people no longer had to work for their survival, as Mother Brain provided everything for them. No longer having to work to survive, the people lost their sense of priorities and became greedy and weak. They forgot that Alis had fought to liberate them and they grew completely dependent on Mother Brain.

Lutz further surmises that something sinister lurks behind Mother Brain and always has, like a devil's trap. Lutz gives Rolf the NEISWORD, the only weapon that can neutralize this evil power, and then teleports Rolf to the spaceship Noah where the evil dwells. Rolf encounters the Dark Force, returned to form after 1000 years, as well as the Dark Force's weapon, Mother Brain. Rolf and his companions fight with all their might and destroy both the Dark Force and Mother Brain.

Lutz then informs Rolf that there are still more lifeforms on board the ship, whom Rolf discovers to be the sole surviving remnant of a people from the planet Earth. The Earthmen explain that they lost their own advanced civilization long ago after failing to reign in their inner evil, taking "joy in controlling nature." By the time they realized they were destroying themselves, it was too late and Earth was doomed. The last thing they could do was build a starship as an ark for their last few. These surviving Earthmen wandered the stars until they discovered the Algol system, where the native Algol people were living in happiness and harmony. The Earthmen coveted the unspoiled Algol planets, and so they created Mother Brain and gave it to the natives in a plot to seed their ultimate destruction.

However, with Mother Brain now destroyed, and the Earthmen's insidious plan foiled, they bluntly declare, "...we hate you for destroying the Mother Brain... You will die!" The Earthmen launch their attack and attempt to kill Rolf and his friends. As this battle beings, the game ends.

The game has been featured in many compilations since its original release: 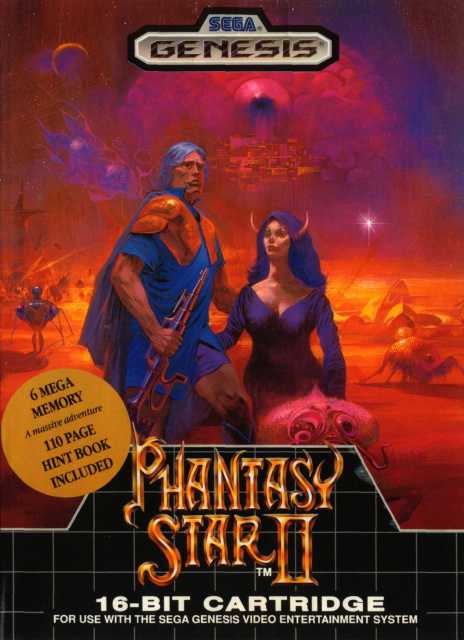