Thief is a first person sneaker made by the now defunct Looking Glass Studios. Unlike most first person shooters, Thief emphasizes being stealthy and tactically creeping past your opponents rather than plowing through them in combat.

Thief: The Dark Project is a first-person stealth-action game, developed by the now defunct Looking Glass Studios and released for Windows PC on December 3, 1998. Set in a fantasy-steampunk environment, the player assumes the role of a master thief called Garrett, whose talents are sought after by a rich collector looking for an ancient artifact.

Living as a street urchin, young Garrett one day attempts to pickpocket from a member of the Keepers, an ancient order secretly maintaining the balance within the city. Recognizing the boy's potential, the man offers Garrett the opportunity of joining the Keepers, which he gladly accepts. After years of training and refinement of his skills to hide in shadows and move silently, Garrett leaves the order out of anger, living his life by stealing the valuables of the city's high-society.

Due to his reputation as a masterful burglar, Garrett is approached by a woman named Viktoria who tasks him with obtaining a magical sword from an eccentric called Constantine, offering excessive payment in return. After returning with the sword, Garrett learns that Viktoria's employer was Constantine himself, testing the thief's talents for a much bigger task. He asks Garrett to retrieve an artifact called The Eye, which is located in a ruined cathedral in Old Quarter, a district sealed off from the city after a catastrophe and now overrun by undead creatures.

After arriving at the outskirts of the cathedral, The Eye tells Garrett he needs to obtain a number of talismans in order to be able to enter the cursed ruins and 'free' the artifact. Garrett has to descend into the remains of the Lost City, an ancient, haunted complex right underneath the current city. He also has to infiltrate the temple of the Hammerites, a religious cult and the law in the world of the game. With the help of these talismans, Garrett finally manages to retrieve The Eye and escape the haunted city district.

Upon trying to collect his payment however, Constantine reveals himself to be the Trickster, a fabled pagan god seeking to destroy the city with the help of The Eye. In order to activate the artifact, Constantine binds Garrett with magical vines and plucks out the thief's right eye. After the Trickster has left Garrett to die, two Keepers manage to free him from the vines and Garrett, having no other option, heads towards the temple of the Hammerites, who have been foretelling the arrival of their enemy. Finding the temple infested by the Trickster's minions, Garrett ventures into a hidden sanctuary and tracks down the remaining Hammerites who provide him with a copy of The Eye. Garrett then has to sneak into the Trickster's realm where the pagan lord is performing a ceremony and exchange the original eye with the booby-trapped copy, killing the Trickster in the process.

In the aftermath, Garrett, whose lost eye has been replaced with a mechanical replica, is again approached by a former Keeper brother. He urges the thief to rethink his ways, mentioning Garrett's supposed role in the Keeper's long foretold prophecies. Garrett rejects the offer, asking him to tell the Keeper council to relay his final decision while walking away. The game ends with the Keeper quietly saying “I will tell them this. Nothing is changed. All is as it was written. The Trickster is dead. Beware the dawn of the metal age”, foreshadowing the events of the sequel, Thief II: The Metal Age.

The story unfolds over the course of self-contained missions. Prior to starting a mission, the player may choose a difficulty level which will alter and/or add mission objectives like obtaining a certain value of loot or, on the highest difficulty, avoiding any casualties. Garrett can then outfit himself with additional equipment from a vendor, using the loot from the previous mission.

Although the game is played from a first-person perspective similar to other popular titles at the time like Unreal or Half-Life, Garrett has to avoid direct confrontation throughout most of the game due to his relatively weak combat skills. Instead, players have to stick to the shadows where Garrett can become practically invisible (indicated by a magical gem at the bottom of the screen) and sneak up on enemies to silently knock them out using a blackjack. Garrett is also a capable bowman and has access to a variety of arrow types like water arrows to put out torches, moss arrows that can quickly grow a patch of moss on otherwise noisy surfaces like marble or noisemakers whose mechanical sound can cause guards to investigate while Garrett slips by unnoticed.

Just as light and shadow, sound takes an important role in Thief: The Dark Project, thanks to the game's Dark Engine. Depending on the surface and running speed, NPC characters may be alarmed of Garrett's presence even if he is completely hidden in shadows. Dropping items on noisy surfaces like metal and engaging in open combat can also lead to unwanted attention.

Garrett is taken through the Keeper Compound and told to complete a series of tasks to improve his skills as a Keeper. This includes:

Garrett having left the Keepers has decided to steal a valuable scepter from Lord Bafford who is out on the town that evening.

Garrett proceeds to bring the stolen scepter to his fence Cutty, only to find that he has been arrested by the Hammerites. Knowing that Cutty is a friend and that he owes money for the Bafford job, Garrett decides to break him out of the prison. The only way for Garrett to access the prison is through a mineshaft that has supposedly been haunted by zombies.

Having died in the prison, Cutty told Garrett about a magical horn that a group of explorers went looking for. Garrett proceeds to travel through the bonehoard, infested with the undead, to find the horn.

Garrett sells the horn to a merchant, who is immediately assassinated. Garrett follows the killers and is led to a noblemen's manor where he sets out for revenge.

Garrett learns that two rivalling thieves' guilds are unable to decide who will keep a stolen vase. He decides to settle the argument by stealing it.

A woman approaches Garrett, telling him that a client wants him to steal a magical sword for a reward, from a man named Constantine who has constructed a bizarre maze-like house in the City.

Having stolen the sword, Garrett is met by both Victoria and her client who turns out to be Constantine. He hired Garrett to test his skills as a master Thief in preparation for his real mission which is to steal The Eye from a haunted Hammerite Cathedral now locked up from society.

Garrett ventures here to find one of the elements needed to open the doors of the Cathedral.

Garrett Continues to find elements for the doors of the Cathedral by searching for a sunken city.

Songs of the Caverns

Garrett must travel underground to find a contact who has been killed by spiders. He must then proceed to the theatre house above to find an element.

Garrett disguises himself as a Hammerite to infiltrate their temple and steal one of the last elements for the Cathedral.

Return to the Haunted Cathedral

Garrett gives the Eye to Constantine at his house who then reveals himself to be the undead Pagan God known as The Trickster. Victoria too turns into a monster and plucks out Garrett's eye to give the stolen jewel sight. Garrett must escape the maze-like house.

Garrett having escaped the house returns to the Hammerite temple to ask for help. He discovers that it has been trashed by the Trickster's beastly creatures and that they have kidnapped a Hammerite Priest. Garrett must rescue him.

The Maw of Chaos

The Hammerities have constructed a fake Eye for Garrett which he must swap for the real one to disrupt the Trickster's final ritual, as he sneaks down into his lair.

Thief Gold has three new levels in it.

Garrett has to steal a artefact that the guild has stolen. The time is right, since the two leaders are currently in a fowl mood and on each others necks. But Garrett has to be careful, since the Thieves Guild folk know him too well and are willing to show him whats right with their swords. The mission a great design and some good well-executed music.

The main goal in this mission is to find and steal the Earth Talisman, one of four which open the cathedral door. But all is not as it seems. The mages have traps and trickery of their own and even mistakes, which ultimately come in Garretts favour. Plus, another place to get loot from is not too bad.

The Water Talisman wass supposed to be in the caverns under the City. It was found by men in service of the local opera house. Garrett must find a way into the opera house and get the Talisman. The level is expertly designed, featureing many little touches like people rehearsing for an opera. The sound design is also very good, using an orchestra tuning its instruments as inspiration. Definently an example of the dedication of Looking Glass Studios. 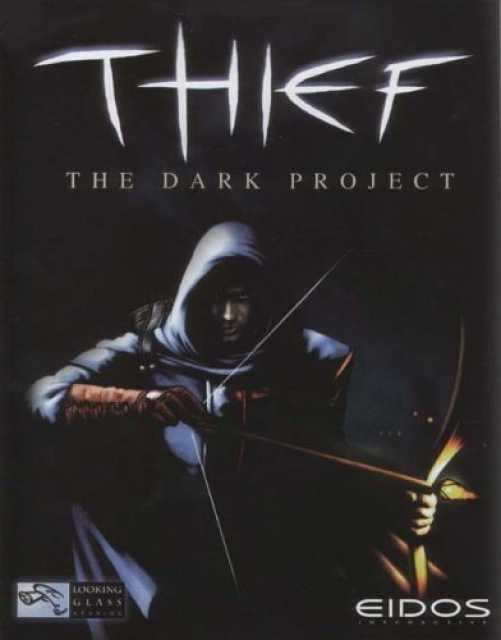