Monster Hunter 4G was announced in Japan at Monster Hunter Festa 13 and later that day, the Capcom Unity blog announced the worldwide release via a video message from MH series producer Ryozo Tsujimoto.

For players of the original Monster Hunter 4, Capcom stated that saves will transfer over into 4G.

This is the first version of Monster Hunter 4 available outside of Japan.

The Long Sword (LS) is a fairly new weapon in the Monster Hunter series. These are longer, thin swords that represent katanas and include weapon speciality called the Spirit Blade. The Long Sword has quick attacks and combos that allow the hunter to achieve a high damage. The Long Sword does not have the ability to guard or block, which makes for the hunter to be more aware of their attacks and combos so that they can move out of the way or cancel them quickly. The Spirit Gauge will fill up over time, while the hunter is attacking, and can increase the damage as well as be spent for a Spirit Combo. A Spirit Combo is 5 fast attacks that can be extended up to 7 attacks and can be canceled out with a Fade Slash.

The Sword and Shield (SnS) is most hunters introduction into the Monster Hunter series. The best balanced weapons in the game, with good raw damage or elemental damage with added mobility and solid defense. Hunters can perform long combinations of moves quickly and block weak attacks without their agility being affected. Having a one handed weapon available, a hunter can use an item with the blocking hand so the draw/re-draw weapon animation isn’t necessary. The Sword and Shield doesn’t have an incredible amount of raw damage but makes up for that with quick attacks, as well as making it one of the better weapons to apply status effects.

The Dual Blades (DB) are a two handed, classic weapon in Monster Hunter. They have a quick attack with weaker stats and no blocking ability. They make up for the weaker attack with better elemental damage and status effects. A hunter an increase their damage by using a skill called Devil’s Dance. The sharpness of the Dual Blades degrades faster than other weapons.

The Hammer has been featured since the first Monster Hunter game and has been a staple in the series for success. When the weapon is drawn, a hunter can move at a normal speed instead of being weighed down by the weapon. Hunters can also roll and dodge without any hinderance. The weapon can utilize charged abilities that a hunter can implement for extra damage, most moves in the hammer set are slow so knowing exactly when to perform the animation is important to all hammer users. A hunter can not cut tails from monster but you can break parts of the monster. Another important feature of the hammer is stun damage. A hammer user can hit the head of a monster until you see stars or yellow bursts (accompanied with a sound) that is a visual/audio indicator that you are doing stun damage. After so many hits, a monster will fall over and be disabled for a short time. A couple things to watch out for is that a hammer can launch other players if they are close enough and the sharpness of a hammer depletes faster than most weapons.

The Hunting Horn was introduced in the second wave of Monster Hunter games that utilizes features from the hammer but also includes a musical capability for buffs. A hunting horn has three colored notes that hunters can play on the horn in order to give a temporary buff to themselves or other hunters that are in the group. Hunting Horns have a longer reach than hammer and also lacks a guard feature.

The Lance is a long pole weapon that is accompanied with a shield. This allows you to strike from a distance as well as block most of the monsters powerful attacks. The Lance is slow and and no dodge ability other than to hop back a little bit. They also have charge abilities to increase damage and maintain their sharpness better than other weapons.

The Gunlance (GL) are weapons that are similar to the lance but the polearm shoots an explosive round called a Shelling. Gunlances do not fire over long distances but provides a sort of shotgun like hit to the monster. You have unlimited shellings but they are preset. Gunlance hunters also have a special explosive attached call the Wyvern’s Fire. Hunters should take reloading time into account since that will open up the hunter for being attacked

The Switch Axe (SA) is another "two weapons in one" combination of an axe and sword. The two forms you can combine moves from each to keep the fluid movement going when fighting monsters. The axe form of the Switch Axe has a long range and can reach parts of the monster that other weapons can't. The sword mode, which uses up a phial, is quicker than the Great Sword but not as damaging to the monster. The hunter can hit combos and build up the phial effect that can produce a more damaging hit, then the weapons goes back to the default axe mode.

The Charge Blade is a transforming weapon which emphasizes adaptability, switching between sword and shield and axe mode to suit the scenario and expend phials to do more damage. The starting form for the weapon is a standard sword and shield which has the ability to block, lunge attack, and slash. The axe mode can be swapped to at any time, and includes wide swings and uppercuts. While in sword and shield form, the Charge Blade can be powered up by attacking enemies. When the phial meter changes color, the weapon's energy can be stored. The phials which have been charged can be utilized in a variety of ways. If the phials are expended on boosting the shield's power, blocks become more effective and damage is increased in Axe mode. The phials can also be expended on powerful attacks in Axe mode, including powered up normal attacks and an extremely powerful Ultra Boost that expends all available phials and boost to deliver a blow with high knock out capability.

Brand new in Monster Hunter 4, the Insect Glaive is a one handed staff with a blade on one end that be used to nimbly attack enemies. It gains it's name from the large insect perched on the other arm of the hunter, which can be sent out to gather various essences from the body of the monster. Red, which vastly increases attack also changes the combo move-set the hunter has available to them, making them hit much harder. White, which makes the hunter faster also makes the vault the hunter can do with the Glaive much higher, allowing the hunter to hit higher up enemies and stop them escaping. Orange essence increases the hunters armour, letting them take more hits and Green essence, which gets the hunter health. This weapon is very nimble and allows the hunter to avoid the monsters easily while using the newly introduced air attacks to their advantage.

The Bow is a fairly weak ranged weapon, requiring no sharpness or ammo. Instead, an unlimited supply of arrows is provided and when shooting these, your shot can be charged up to target different ranges. If the player manages to hit a correctly charged shot at the right range, the screen shakes slightly and the monster will take more damage.

You can also cover your arrows in various coatings, which give different properties, such as poison, sleep and paint. These use phials, and are the closest the Bow gets to ammo or sharpness management. The bow can also fire in a mortar style arc when charged, allowing a more accurate hit without having to compensate for drop.

Capcom partnered with various companies to include several new crossover costumes and items into this version of the game, on top of those found in the original release. 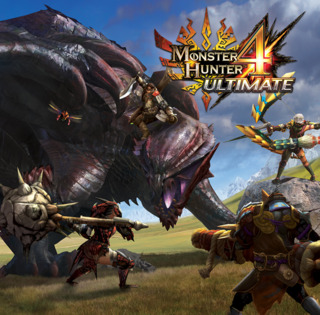