Action RPG released for the iOS mobile platform in 2013.

This fantasy action RPG sees players diving into the world of the Dracon Peninsula as a young soldier heading out to war against the land’s former masters. Years without order have resulted in chaos throughout the land, so players must also work on unifying the Peninsula’s seven regions before it’s too late.

In Conquest Age, players create a character in one of three classes: crimson assassin, desert warrior, or northern barbarian. Each one has its own skill tree and abilities for players to unlock, and while it’s possible to play the game while equipping any kind of weapon, players are rewarded for matching weapons to their character’s type and build.

The game offers both single-player and multiplayer modes, as players can team up with others in cooperative conquests. During battle, players tap on buttons to attack enemies, or block and counter enemy attacks. Attacking requires energy, but this recharges quickly in relation to the speed stat of the character. 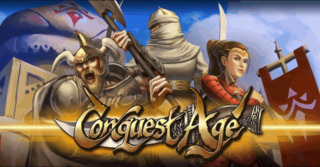