Ratchet & Clank: Going Commando is the second game of the Ratchet & Clank series, developed by Insomniac Games and published by Sony Computer Entertainment for the PlayStation 2 in 2003. The story of Going Commando takes place a year after Ratchet and Clank first save the Solana Galaxy from Ultimate Supreme Executive Chairman Drek. Now both Ratchet and Clank are hired by the Megacorp company to find a blue-fuzzball creature that was stolen from the company's lab. As Ratchet finds out about the thief's plans, he learns that the creature called the "Protopet" is dangerous monster that can destroyed the whole Bogon Galaxy, now Ratchet and Clank must save the galaxy once again.

Ratchet & Clank will explore the galaxy in a semi-linear fashion with an ever expanding selection of locations available from the ship's galaxy map. Apart from tighter movement and platforming with an increased focus on shooting, the gameplay formula is similar to the first game but with additions such as upgradable weapons (upgraded by continued use), customizable ships and armor, a fighting area with bolt rewards, space ship battles, and hacking minigames to unlock doors.

Familiar elements also return like hover racing events, skill points and a new game plus mode called "challenge mode" which increases the difficulty but allows the player to keep their current weapons and equipment, and even unlock more challenge mode exclusive items.

Upon defeating Ultimate Supreme Executive Chairman Drek, Ratchet and Clank become galactic celebrities. Nearly a year passes when the duo are interviewed for Behind The Hero, a HoloVision documentary show. This grabs the attention of Abercrombie Fizzwidget (founder and CEO of Megacorp) who teleports them to a luxury apartment on Megopolis in the Bogon Galaxy.

Fizzwidget's hologram requests their assistance in the recovery of a dangerous biological experiment (with the appearance of a cute, blue fuzzball) stolen by a mysterious masked mastermind. After the supplied commando training and equipment, Ratchet is sent to a flying laboratory on planet Aranos but thief makes a quick getaway with the experiment.

Ratchet and Clank chase the thief across several planets before encountering him on the frozen planet Siberius where he's defeated and the experiment is recovered. Upon returning to Fizzwidget at the desert planet Tabora, he "accidentally" ejects them from their ship, crash landing them onto the planet.

Here, they are confronted by the thief demanding the experiment however he trips and falls, ripping the mask off to reveal a female Lombax named Angela Cross, a former Megacorp employee. She warns them that the experiment would doom the galaxy. On the planet Dobbo they realize her claims are true and attempt to warn Fizzwidget to destroy the experiment, but are unsuccessful.

It's revealed via an advertisement that the experiment (now named "The Protopet") is being cloned and prepared for mass release. On planet Boldan they're captured and imprisoned by Thugs-4-Less, a mercenary company hired by Fizzwidget. However they're able to escape and rescue Angela before travelling to Megacorp HQ to destroy the Protopets.

They discover that disgraced superhero Captain Qwark had disguised himself as Fizzwidget and was behind the plan to release the Protopets in order to destroy them to "save" the galaxy and restore his reputation as a superhero. His plans are foiled when he attempts to use Angela's Helix-o-Morph gadget designed to repair the Protopets' aggression on the original experiment, however it malfunctions, mutating it into a giant monster that swallows him.

After defeating the giant Protopet, Angela and the real Fizzwidget arrive explaining that he'd been tied up in a closet for the duration of Qwark's takeover. The Protopet regurgitates Qwark and Angela flips the Helix-o-Morph's batteries in order to shrink it back to it's original size. She then amplifies the device using Megacorp's TV transponders to destroy all the Protopets in the galaxy.

Ratchet, Clank, Angela, and Clank's Infobot lover he had met earlier relax in Ratchet's apartment in Megapolis where Angela reveals that Qwark is now employed as a Megacorp test subject.

Going Commando takes place in the Bogon Galaxy, a neighboring galaxy to Solana. The galaxy's leading weapon manufacturing company is Megacorp, based on planet Yeedil and headed by the CEO Abercrombie Fizzwidget.

Guns can be upgraded by using them against enemies a specific number of times. If weapons are upgrades once then mega weapons become available to purchase but only in challenge mode (new game plus). Mega weapons can then be upgraded to ultra weapons through use. Not all weapons have upgraded, mega or ultra variants.

Certain weapons can be gained for free if an original Ratchet & Clank game save is detected. These weapons appeared in the first game and include the Bomb Glove, Decoy Glove, Tesla Claw, Visibomb Gun, and Walloper. 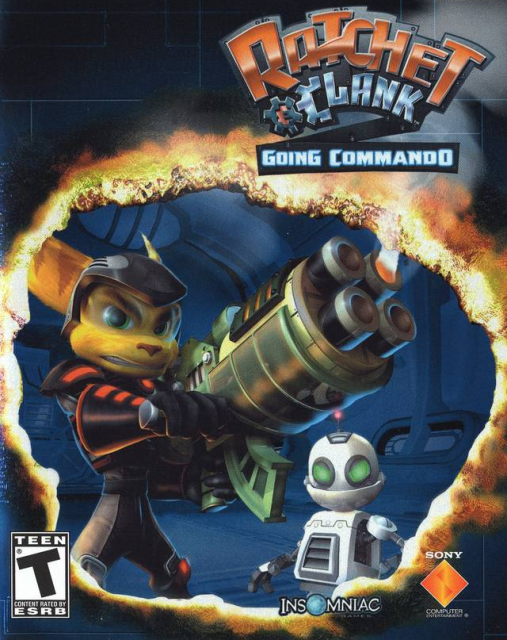