With the shift from military to law enforcement there are a couple notable changes to the single-player and multiplayer experiences.

The single-player gameplay largely goes unchanged from the other entries in the Battlefield franchise aside from a few additional mechanics and tools. The most notable addition is the ability to arrest enemies, upon approaching a group of criminals the player can flash their badge freezing the enemies in place. The player then has the option to arrest the criminals one at a time, however the player must keep their firearm fixed on the enemies or they will become hostile again and pick up their weapons. If the mission provides a partner the partner will keep the remaining enemies at bay while the payer arrests them.

The next addition is the ability to toss shell casings to distract enemies, it functions similarly to the rocks players can throw in Far Cry 3. This works great in tandem with the arresting mechanic, distract an enemy then sneak up behind and make an arrest.

There are also new tools available to the player. The player can equip a taser which can be used to take down an enemy non-lethally, this is useful for incapacitating a high-value target from a distance. The player is also given a scanner, this gives the player the ability to tag enemies and alarms, identify high value targets and log evidence.

Hardline adds some new modes that change up the gameplay experience quite a bit for veterans of Battlefield. The new game modes are Heist, Blood Money, Hotwire, Rescue and Crosshair.

Both criminal and law enforcement teams are tasked with retrieving cash from a centralized location. Once cash has been collected it must be moved to the teams vault located near that teams spawn point. Vaults that are holding cash can be raided by the opposing team, this means teams must also protect cash that has already been extracted from the central location. The game ends when a team reaches a set amount of cash in their vault, or when time expires, the team with the most cash is awarded the victory.

Both police and criminals are tasked with capturing marked vehicles on the map, in order to capture a vehicle the player driving must reach a certain speed and continue driving. Once a vehicle is captured it will begin to reduce the opposing teams tickets, the more vehicles held the quicker the tickets deplete. In order for a team to win the opposing teams tickets must reach zero. This mode most resembles Conquest mode from the other Battlefield entries, with vehicles replacing flags.

Details about the game leaked on May 27 in an update to EA's Battlelog service, which included assets and info ahead of the official announcement. Soon after, a gameplay trailer emerged that used the codename "Omaha." Visceral Games VP Steve Papoutsis officially confirmed the game's existence in a post on EA's website that same day, mentioning that Hardline would begin "a whole new series in the Battlefield franchise." 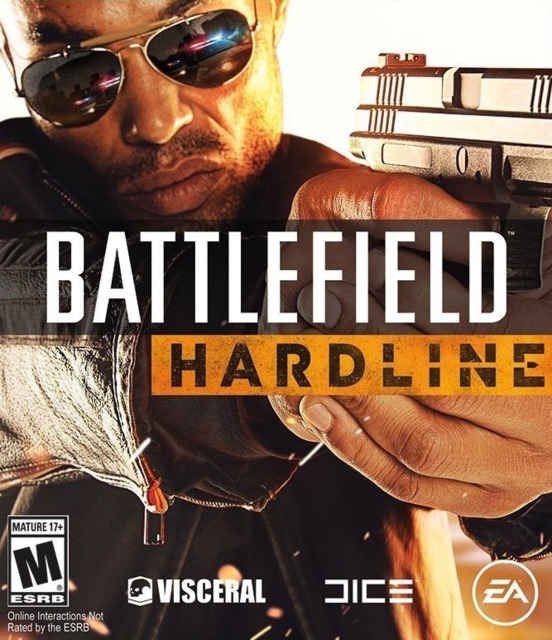