Z is a real-time strategy game released in 1996 for MS-DOS, PlayStation, Sega Saturn and Windows. It is about two armies comprised of intelligent robots fighting to conquer several planets.

The player's aim, as the commander of a robot force, is to annihilate the enemy forces and to conquer each planet. The enemy on each planet are disposed of in one of two ways. Players can either destroy all of their soldiers, or infiltrate an enemy headquarters. Experience the war alongside the trigger-happy Commander Zod and two notorious robot slackers from the Red Faction, Brad and Allan.

Unlike many contemporary real time strategy games, there is no base building or classic resource management. More similarly to the MSX and Genesis proto-RTS Herzog series the objective is to defeat the enemy by capturing territory and either destroying all the enemy units or infiltrating the enemy's headquarters. The original game is also extremely slow, with emphasis on strategy and building tension, but with Z95, they offered the option for faster gameplay. Along the way, the action is complimented by the voices of the player's comrades.

In Z; gathering resources, building bases, and creating army units, are handled automatically, The gameplay focuses on action and micro management. Instead of creating buildings, players capture the territory that a building is encompassed by and it will automatically begin producing allied units. This means that enemies can potentially capture the player's territory right before any units are produced and vice versa. Players are able to choose what units are manufactured by each individual factory, but the rate of production is determined by how powerful the unit is, how much territory has been conquered, and how much damage that building has taken. The terrain can be deformed, with sometimes surprising results. Rocks can be exploded and the debris will fly up in the air and can kill units if they get crushed by it, the same is true for anything that explodes. Bridges can be destroyed to distract the enemy, factories can be destroyed to delay reinforcements.

Units will express emotions related to their orders and the player's decisions - this includes expressing calmness, anger, terror, anxiety and desperation. This acts as a way of communicating with the player on a more understandable level and less intruding manner. For example, if weak units are sent against more powerful ones they will respond hesitantly.

Combat takes place on several planets, with 4 missions on each. When one is successfully captured, a space ship transports the robot army to another. Worlds are divided into the following types:

Drivers can be shot out of vehicles, allowing them to be captured by the enemy.

Effectiveness of artillery is based on the intelligence of the robot unit operating it.

There are six different weapons, some are used by multiple unit types.

There are eight different kinds of structures.

Z was in development for roughly 3 years and was likely influenced by the early Genesis RTS Herzog Zwei and Dune 2, a game that popularized the RTS genre.

The game was known best for its sense of humor, excellently rendered cinematics and its polished graphics and animation.

It was released alongside other big names in the real-time strategy genre, such as Warcraft 2 and Command & Conquer. 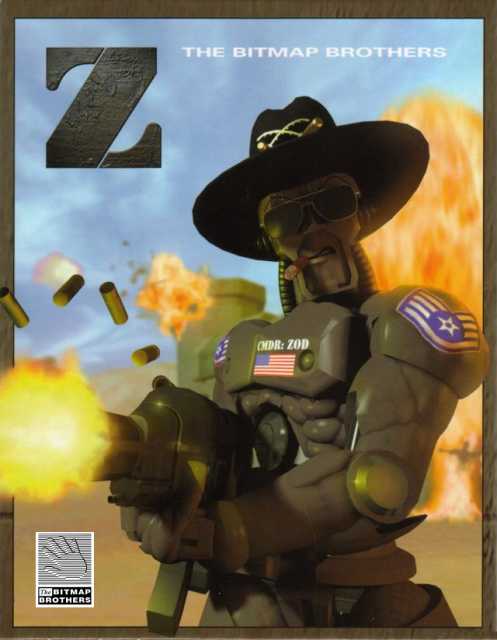