F.E.A.R. places players in charge of the Point Man of an advanced paranormal military unit entitled "First Encounter Assault Recon" (or F.E.A.R.). The game takes place in the city of Auburn, and takes the player across a variety of locales that all fit a dark claustrophobic theme. The game was released for the PC originally, and later ported over to the Xbox 360 and PlayStation 3.

The game is often praised for its AI advancements, creating enemies that communicate with each other and give each other orders such as "Flank Right!", "We gotta regroup!", and "We need reinforcements!" All of the AI's communications can be overheard by the player via radio. Along with shouting out orders, the AI is also very aware of the player's presence, and often give out his location to the rest of the squad such as "He's behind the table!," "He's not here!," and "He's trying to flank!" If the player makes a loud sound by knocking a bucket over or letting a shot off, the AI will send two members of it's squad to investigate.

To balance out the extremely intelligent, AI, the player is given the ability to slow down time, use cover, lean left or right, and use a variety of deadly melee attacks & high powered weapons. Because of the variety of the combat, F.E.A.R. is renown for its intense shoot-outs. The developers have stated that they wanted the action sequences to feel like the tea house shoot-out from Hard Boiled.

F.E.A.R. is also often recognized by the recurring appearance of Alma, a little girl in a red dress who torments the player with horrifying visions and hallucinations throughout the game. Alma will appear in tense moments of the game in an attempt to startle or frighten the player. Examples of this are hallways filled with blood, random lights flickering, and voices coming from dark corners. Some hallucinations contain elements that can injure or kill the player, making them more than a simple scripted event, and keeping the player perpetually on their toes.

A large part of this is due to the claustrophobic level design and aesthetic, which has the player constantly weaving through small dark hallways, offices, dingy industrial areas, and worn-down condemned buildings. The creepy sound design also makes the atmosphere highly effective, which the soundtrack ratchets up at appropriate times for the necessary adrenaline boost for action sequences.

Puzzle solving is also present in this game to break up the action, but the puzzles present are never too challenging. They all consist of the archetypal "turn a valve to put out a fire" or "use a switch to open a door" puzzles. The game also has very minor platforming elements, that usually involve clearing a tiny gap in between rooftops, or walking outside on the windowsill of a tall office building.

The story follows the F.E.A.R. Point Man as he follows his orders to track down renegade psychic Paxton Fettel. Fettel is a prototype for an Armacham defense project entitled Project Origin which aims to have a commander telepathically control a battalion of soulless Replica Soldiers. As the Point Man chases down Fettel he learns more about Project Origin, uncovering the roles played by Harlan Wade, Alma, and Genevive Aristide. The story takes the player through docks, a water treatment facility, Armacham offices, condemned buildings, and eventually the secret facility where Alma is located.

The story is told largely in-game through the player overhearing conversations between NPCs or finding information on laptops and voicemails throughout the campaign. All of the "cutscenes" are integrated in the form of hallucinations, as not to break immersion.

The player can do various punch and kick attacks, depending on their context to the environment, movement, and whether or not their weapon is holstered. If the player ducks and presses the melee button simultaneously, the point man will do a far-reaching slide kick; jump and melee will do a bicycle kick.

A high-capacity, low-power sidearm. Only really useful in the earlier game when enemies have little armor. Can be dual-wielded.

A more powerful pistol than can also be dual wielded. This weapon is only present in the console versions of the game.

A high-speed blitzing option. Feathering the trigger makes it burst fire. Soldiers field this weapon frequently, making ammo easy to find. While very good against many lighter opponents its armor-piercing capabilities are lackluster and must be supplemented for heavier engagements.

The Replica standard issue. This rifle is the most well-rounded of all the guns; good range, good accuracy, good damage, good AP. There is a weapon superior to it in every category, but none more universal. This weapon also burst fires if the trigger is quickly tapped.

Probably the most useful weapon throughout the majority of the campaign. Will instantly gib any enemies at close range, and has a decent medium range as well. Pump-action and per-slug reloading make multi-target engagements difficult, but the Combat Shotgun excels in any short-term conflict.

An extremely powerful nailgun, and frequently used by the heavy Replica soldiers. This weapon has no recoil and perfect accuracy at any distance. When a standard enemy is killed by a nail it pins them to the wall. Its rate of fire is ponderous but its anti-armor capabilities are unbeatable in the range of standard weaponry.

A burst-firing sniper rifle. Extremely powerful, but always has very little ammo when found. The ASP rifle has a zooming scope and, while not perfectly accurate, is still well-suited for any longer range engagement.

A rocket launcher that fires 3 missiles in a swirling formation. This weapon is rare as well as dangerous for its user, making it an uncommon choice in the arsenal.

An incredibly powerful beam cannon. It will instantly kill any standard human enemies, leaving behind a scorched skeleton. The Particle Cannon is the only perfectly accurate weapon in the game, making it a great sniping substitute to the ASP rifle when ammo for the ASP is not available.

A very strong cannon with a large clip, it is effective at taking down larger opponents. Its collateral damage is significant, so close-range fire is discouraged.

A short-fused handheld explosive. It will explode upon contact with an enemy or when its three-second timer expires. The explosion seems to cause a fluctuation in time and space, though it mostly just kills with great efficiency.

An explosive disc that can be thrown into rooms or choke points, these must be activated with a detonator.

A Bouncing Betty that waits for an enemy to come into its kill range. The Replica forces will use these mines against the player, and the mine's owner is indicated by the color of the light on top: the player's mines are blue while the enemies' are red.

Cloned soldiers that are telepathically controlled by Fettel. These enemies are prevalent throughout the game, and have any combination of the weapons available. They have an extremely intelligent AI that will take advantage of flanking, suppressive fire, and flushing techniques whenever the opportunity is presented. They are far more aggressive than the average soldier of similar shooters and will actively hunt the player down using tactical maneuvers.

Replica Soldiers wearing heavy armor and equipped with HV Penetrators. They make formidable foes if the player is not equipped to deal with them.

Quick moving assailants. They have the ability to cloak, and get up close to do melee attacks. They come out of ducts in the ceiling and blink around rooms. Make quick work of them with the shotgun.

Regular human enemies. They are the security guards of Armacham, and will occasionally get into 3-way fights with the replica soldiers. ATC Security do not have the armor of the Replica Soldiers, but they are much more accurate and tend to field stronger weapons, such as the ASP rifle.

Known in the game as R.E.V.E. 6 power armor, these gargantuan enemies will drop in at unexpected times, and assault Point Man with a barrage of rockets or lasers. It's a war of attrition and circle-strafing with these beasts, and power weapons are the best bet against them.

Surrounded by a blue glow, these laser-firing flying turrets will hover around slowly and harass Point Man. Their projectiles are near unavoidable without SlowMo.

Protecting Armacham facilities, these turrets drop down the ceilings to wail on Point Man with gunfire. They are very accurate and hard to destroy, but their activation switch is rarely far from the turret itself and should be sought out quickly after seeing one. Certain computer terminals will let the player take control of them and harass the opposition.

Apparitions with glowing eyes that materialize out of thin air. They will immediately make a beeline for the player, and explode on contact doing severe damage.

F.E.A.R. was released on Steam by Warner Brothers Interactive on May 10th, 2010, alongside expansions Extraction Point and Perseus Mandate, all three sold in a single $10 package. In all three games, references to Vivendi Universal in the opening screens and in the beginning of the game have been replaced with the WB Games brand. 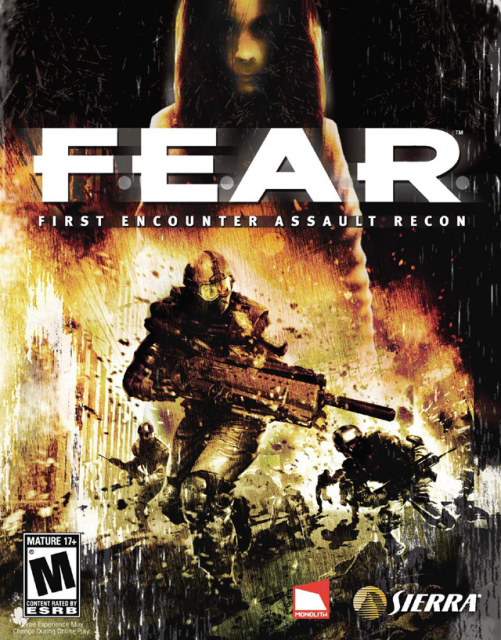