Ratchet & Clank: Up Your Arsenal

Ratchet & Clank: Up Your Arsenal (otherwise known as Ratchet & Clank 3 in Europe and Japan) is the third game in Insomniac Games platforming series of games, Ratchet & Clank. It was initially released on November 3rd 2004 in North America and has since been remastered as part of the Ratchet & Clank Collection which saw the first three games in the franchise being remastered in HD.

The game retains the gameplay structure of the previous entries in the series as Ratchet and Clank face off against the evil Dr. Nefarious as he attempts to destroy all forms of organic life.

When the two characters arrive it's soon revealed that Dr. Nefarious is behind the attack. He has recruited the Thyrranoids to take over the galaxy. Ratchet and Clank then set of to defeat Dr. Nefarious and save another galaxy, but this time to save all organic life-forms from being changed into robots.

Dr. Nefarious is an evil mastermind who is now a robot after being almost killed by Captain Qwark a long time ago. He is joined by his companion, Lawrence, who frequently has to slap Dr. Nefarious out of malfunctioning.

Dr. Nefarious plans to take over the galaxy by destroying all organic life using his super weapon which turns living things into robots and Ratchet sets off to stop him. To do this they have to find Captain Qwark, who has gone missing, in hopes to get his assistance. And so begins the massive adventure of Ratchet and Clank: Up Your Arsenal.

The gameplay in R&C:UYA is reminiscent of the last game in the series, but adds a few new control setups. The basic gameplay remains the same but is refined in this game along with new weapons, armor, and new spaceship designs. A new feature in Up Your Arsenal is the existence of a home base, which was a first for the series. This Starship Phoenix served as a hub to receive new missions, upgrade their armor, buy new weapons, go through VR missions, and do some other activities.

You also have your own living quarters in this ship, containing a fictional gaming console on which you could play a minigame to progress the story. This mini game is the "Captain Qwark vid-comic" series in which the player plays as Captain Qwark back in his glory days when he first defeated the games main bad guy, Dr. Nefarious.

The game itself is a side-scrolling shooter. You have to jump over obstacles, collect stuff, defeat random enemies and kill a boss at the end of every level to unlock the next mission in the story of the main game. There are also hidden collectibles in the levels and you also unlock skill points for getting through the levels really fast.

The game has a 2.5d look where a 2d game is rendered in 3d and also matches the real games graphical style and even has some of the same levels. Each episode is introduced by a cartoony cutscene which also hints at the stories being a bit modified to make Qwark seem more heroic than he really is.

The Annihilation Nation is a TV show that is popular in the Solana galaxy. It's a show where gladiators fight for money and prizes. Ratchet enters this tournament to win a Thyrra-guise, a device that makes the wearer look and talk like a Thyrranoid. Unlike Dreadzone, Annihilation nation is legal. This is also where the duo meets Courtney Gears for the first time.

After he beats the first challenge, being the first one ever to do so he is invited to take on further challenges for cash and prizes. The fights are a great way to win money and level up your weapons.

There are 2 main types of challenges:

Arena battles where waves of enemies come at you and you just have to survive. In the first challenge, you have to fight 3 waves but it gets significantly tougher. One wave can also be a boss.

There are two bosses, Gary and Helen (Two gladiators who fight you as a tag team) and Scorpio, a robotic scorpion equipped with razor sharp blades and flamethrowers.

In the last fight, The Qwarktastic Challenge, you have to fight through 99 rounds of enemies and both of the bosses.

The other type of challenge is the gauntlet where you have to fight your way through a course and survive. These types of challenges are alot tougher than the arena challenges because not only you need to focus on obliterating your way out of a fight, but you also need to concentrate on completing the course which in most cases tests your reflexes.

There are many aspects in Up Your Arsenal that increase its replay value. There are Titanium Bolts that can be found on each planet that give you access to fun cheats. There are also skill points to be earned on each planet for doing various tasks that you can use to get different skins for Ratchet, such as a snowman skin.

You can also get Trophies. You can get them for a large variety of different things starting from just finding them to winning all of the arena challenges. If you get all of them you unlock the Insomniac museum, a collection of things that didn't make it into the full game and the area where they are displayed is modeled after the Insomniac games offices. All of your trophies are displayed in the Trophy room of the Starship phoenix.

The game was the first game in the Ratchet & Clank franchise to feature multiplayer which could be played either online or locally. The original PlayStation 2 online service was terminated on June 2012 although the HD re-release on the PlayStation 3 featured an online version of the multiplayer as part of the HD remastering. The PlayStation Vita re-release did not however feature any multiplayer functionality due to all of the games on the collection disabling the Vita's network features to free up system resources.

Features include: various changeable skins, buddy lists, clan support with private clan games, leaderboards, and voice chat for all eight players. The gametypes are all standard shooter modes with a Ratchet and Clank twist added.

Siege mode is the game's assault the base mode, revolving around capturing and maintaining nodes, which players can spawn at. Capturing nodes lowers the defense of the base. Once the outside defenses are defeated, players enter the base and destroy the core to win.

Capture the flag and Deathmatch in Ratchet and Clank: Up Your Arsenal saw little changes to their core ideas; in CTF, the flag could be used by it's carrier as a weapon. Deathmatch could range from teams of four on four to free-for-all.

Weapons in the online mode could be upgraded after three consecutive kills, giving them a faster rate of fire, more ammo capacity, and/or more damage. Defeating an enemy caused them to drop a weapon pack containing all the weapons they posessed upon death, allowing upgraded weapons to be passed to other players.

Ratchet and Clank Up your Arsenal and Ratchet: Deadlocked's online were based off of Unreal Tournament 2004's onslaught mode, which puts an emphasis on teamwork and overall is extremely rewarding and well balanced multiplayer experience. 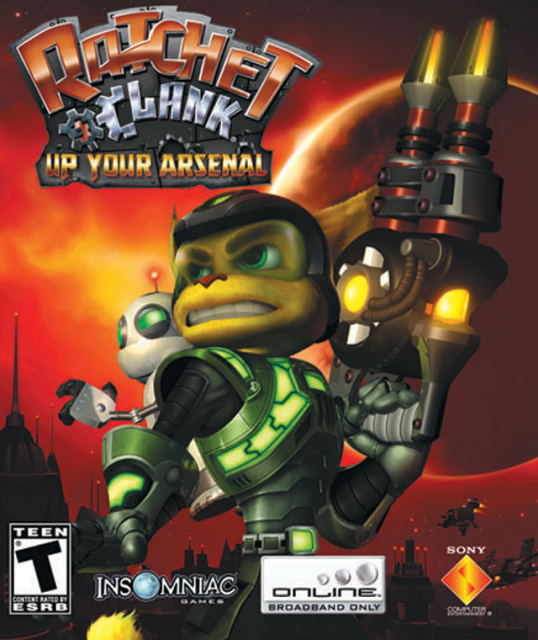