With Earth's resources spent, galactic corporations battle for control of the Moon and Mars. When the Eight Luck company claims Mars for itself, the JDF establishes the Scarlet Lotus Team, a group of elite pilots, "Tera Divers", to fight back.

Originally released in Japanese arcades in January of 1997, Soukyugurentai, alternatively Soukyuu Gurentai and known as "Terra Diver" in the west, is a vertical-scrolling shoot 'em up.

After its arcade release the game was published by Electronic Arts for the Sega Saturn on February 7th, 1997. The PlayStation release came by way of publisher Data East on December 25, 2007.

The game was originally built on the STV Arcade Board and the Saturn version is considered effectively "arcade perfect", while the PlayStation version introduced some input lag and other, slight drawbacks.

Humanity has dessicated the Earth, and moved on to zpace colonization in their search of ressources, namely fossil fuels. For years mining facilities are operated on the Moon and Mars and Earth's trading companies work together to revive the planet's economy. One company rises above all others over time - the Jin-Sei or Exhausting Star Corporation - and soon finds itself the defacto leader and ressource controller in many sectors.

As years pass, the age of Earth's rehabilitation is replaced by increased competition on the part of the trading companies and suddenly violence and battle are introduced into the equations. In fighting for different sectors and resources becomes common. The Eight Luck Interstellar Development Inc., the second largest company behind Jin-Sei, begins creating alliances with other smaller companies the world-over - their plan? To take over Mars and monopolize the outsourcing of those goods and take control of terraforming initiatives. Using the popular thread of eco-terrorism to hide facts from the public, a war begins between Eight Luck and the Jin-Sei.

So, needing a response to this concentrated aggressive effort, the Jin-Sei combines with JSDF to form JDF, and within it a specialized response team of highly trained combat pilots - the Scarlet Lotus Team, or SOQ for short.

The player will choose from of four SOQ pilots in the game.

There are four ships to choose from in the PlayStation version of the game (three otherwise). While the general shoot 'em up (shmup) action of the game is identical with all ships and could be described as traditional across the board, each ship also has its own firing pattern and two unique abilities which are part of the more novel mechanics in the game; by holding down a button the player activates a targeting web. Enemies in that web can be locked on to and eliminated effectively without aiming. 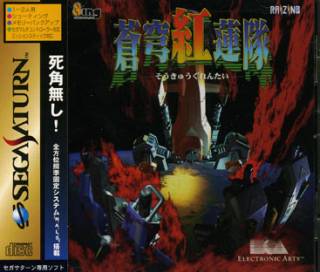