A notable early MMORPG and the chief rival to EverQuest prior to the release of World of Warcraft.

Asheron's Call is an early release MMORPG, released the same year as its primary rival Everquest. The game was created by Turbine and originally released by Microsoft. Turbine bought the full rights from Microsoft in 2003, moving the game completely in house during 2004. In March 2014, the game received its final major content patch and now Turbine has begun updating the game only as maintenance.

The game boasted a very deep system for character creation eschewing the selection of classes in favor of allocating a limited amount of points to primary stats and selecting training and specialization in a wide range of skills. This creation method allowed the player to create a highly customized character with the benefits and drawbacks that freedom provided. It was possible and probable to create characters wholly incapable of surviving in the world.

Asheron's Call was also known for its monthly game updates. Initially, instead of expansion packs, the developers at Turbine chose to create monthly patches for the game that would introduce new and altered content for players. For instance, one of the first patches to the game, corresponding with the Christmas season, introduced snow covered terrain and a host of seasonal items such as snowballs and holiday themed quests and enemies. While Asheron's Call has received two expansion packs, Turbine continued with extensive monthly updates until March 2014.

Asheron's Call implemented a seamless overworld with no loading between "zones." A character was capable of running from one side of Dereth (The name for the game's world) to the other without encountering a loading screen. The game world was also extremely large and could easily take a player over an hour to cross on foot. This decision to create the world without the use of zones allowed the terrain to be much more open and expansive, without funneling a player through bottlenecks to trigger loading between areas.

The game has several PVE servers as well as one PVP server. Upon entering the PVP server of Darktide, all characters are flagged for PVP play upon creation. In PVP play you are able to kill other players and loot their corpses of any items that they may drop upon death. Characters playing the game on a PVE server can choose to flag themselves for PVP by praying at an altar. This change can be reversed by praying at a separate altar. 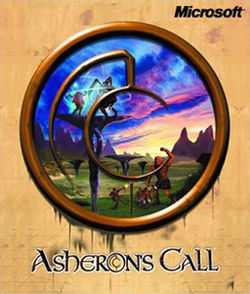