Medal of Honor: Heroes is a WW2 first person shooter. This title was released only for PSP.
PlayStation Portable PlayStation Network (PSP)

The campaign spans Italy, Netherlands, and Belgium in the fight to end World War 2. You play as various heroes from the Medal of Honor series. There is no overarching story, however the context of the missions in regards to WW2 as a whole is briefly touched upon in the briefings.

The single player is comprised of exactly 15 missions, the areas which are also the 15 multiplayer maps. (although 3 of the maps are duplicates, where only item placement and time of day differs) You can challenge yourself to finish the missions on the Green, Veteran and Hero difficulty settings (with Green being the easiest, and Hero the most difficult) and acquiring gold medals in each mission on each difficulty. A gold medal is acquired if you complete all mission objectives and while maintaining a shot accuracy of over 60 percent for that mission, and killing at least a certain amount of enemies.

The missions are largely nonlinear and have multiple objectives located around the map. Essentially you must reach a number of key locations on the map, usually to take an item there (such as enemy plans, research papers, etc) or to hold the location long enough to gain control of a flag. Some missions end when you reach a certain number of points, and points are acquired by defending key locations. As long as you control a flag, your score gradually rises. The more flags you control at a time, the faster you accumulate points, however a flag returns to normal after a while after you've left the area.

Some of these gameplay elements were seen in the competitive 32 player multiplayer which includes; team deathmatch, deathmatch, skirmish and two other variations of team deathmatch that change spawning and weapon pick-ups, which is seen through the 12 different maps. However, the online play was shut down.

The game features a large array of fans of the series favorite weapons including the MP40, MP44, Thompson and Gewehr rifle.

Medal of Honors heroes allows you to choose from four preset control schemes. In addition you are able to increase the sensitivity of either the X and Y axis, or both.

The default control scheme uses the nub for movement and the face buttons for aiming.

In addition to grenades and a 45 Automatic pistol which is carried on you all the time, you are equipped with one of the weapons in the list below. To pick up a new weapon, your current weapon must be dropped. The exception to this rule is the Luger pistol, which replaces your default pistol rather than your main weapon.

The online servers for Medal of Honor Heroes were shut down.

Medal of Honor Heroes features ad-hoc play for up to 8 players.

A demo of this title was released and can be found online. The demo gameplay is limited to skirmish mode and a single map against AI opponents, simulating an online free for all match. This skirmish mode is included in the full game, with all maps.

Medal of Honor Heroes 2 was created for both PSP and Wii. 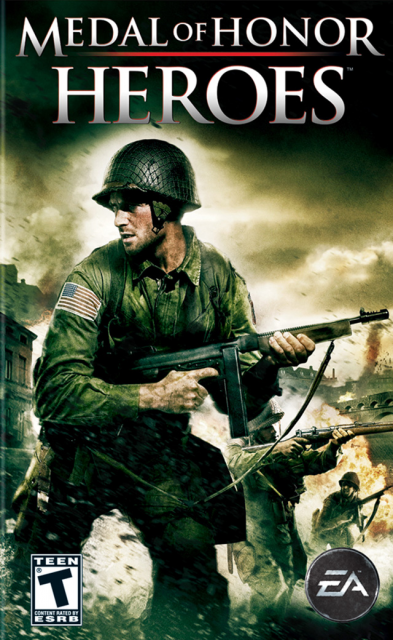