A comedic platformer based on an anime about a spoiled rich kid.

Obocchama-kun is a platformer exclusive to the Japanese PC Engine and features the eponymous Obocchama-kun, an obnoxious rich boy character created by Yoshinori Kobayashi to reflect and satirize attitudes during Japan's late-1980s/early-1990s economy bubble.

Obocchama-kun is able to summon helpers and transform, both of which help keep him alive longer despite his one-hit kill status. Depending on certain button combinations, Obocchama-kun can increase his jump height and use turtle shells to transform into stronger characters. Others, like turning into a dog whenever the player presses down on the D-pad, are simply cosmetic visual jokes.

The game is not to be confused with a 1991 Famicom Obocchama-kun game put out by Tecmo which is a multiplayer board game. 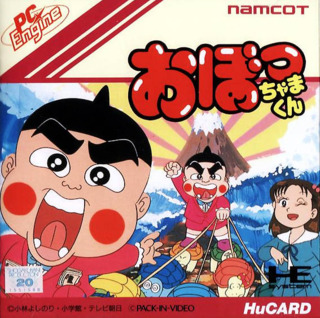