Genghis Khan II: Clan of the Gray Wolf is a historical simulation and strategy game from KOEI that lets the player conquer Mongolia and Greater Eurasia during various scenarios.

Genghis Khan II: Clan of the Gray Wolf (JP: Aoki Ookami to Shiroki Meshika: Genchou Hishi, or "Blue/Gray Wolf and White Doe: The Secret History of the Yuan Dynasty", the subtitle referring to the ancient literary work of the same name) is a strategy simulation game from Koei and a sequel to the 1987 strategy game Genghis Khan. Like its predecessor, Clan of the Gray Wolf allows the player to follow Temujin, later Genghis Khan, as he conquers various parts of the world with his Mongolian horde. The game plays similarly to Koei's other Historical Simulation games, like Romance of the Three Kingdoms and Nobunaga's Ambition.

The game was released on the PC-8801 and ported to various other systems. The SNES version was later rereleased on the Wii's Virtual Console in Japan and the US in 2009 and again in 2015 for the Wii U eShop. 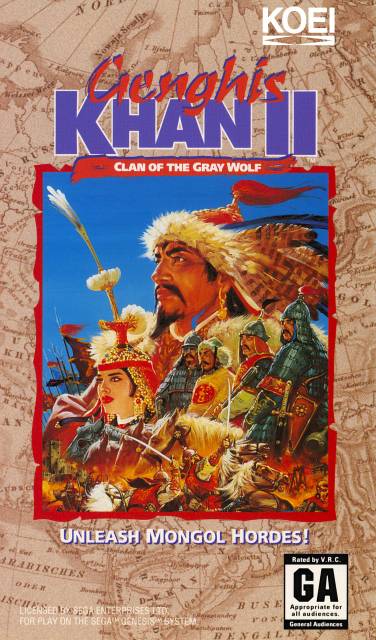