Lufia II: Rise of the Sinistrals

Lufia II: Rise of The Sinistrals is a 1995 RPG released late in the life cycle of the SNES. It acts as a prequel, filling in the plot leading up to the flashback at the beginning of Lufia & The Fortress of Doom.

Lufia II has players take control of Maxim, wielder of the Dual Blade and leader of the four warriors who first defeated the Sinistrals. The story of this battle is told in the opening scene of Lufia & The Fortress of Doom. The game follows Maxim's beginnings as a monster hunter, through meeting the other three warriors, to the final battle against the Sinistrals. It has a mixture of traditional turn-based combat and puzzle solving.

In 2009, Square-Enix announced that Lufia II would be remade as Estpolis: The Lands Cursed by the Gods for the DS, and also noted that the majority of the original development team from Neverland Co. is intact and will be working on Estpolis.

After that, the game switches its focus onto Maxim, a monster hunter in the town of Elcid. He hunts down monsters around town for a fee, and is paid by the local shop owner Tia. One day a large ball of light streaks across the sky to the north. Maxim goes to investigate and discovers that the way north was blocked by monsters. After fighting them he is approached by a woman named Iris who tells him of the Sinistrals and his destiny to face them. From there they begin their journey to find the Dual Blade, and defeat the Sinistrals. Several party members are only temporary until the final four come together, but the other playable characters continue to have impact on the plot even after their departure.

When in a dungeon Maxim and all enemies are represented by moving sprites. For every step Maxim takes the enemies move a set amount, and in a set pattern, based on what they are. Making contact with an enemy initiates battle. Depending on Maxim's orientation when he touches an enemy the player may end up with a preemptive strike or be ambushed. This is why when navigating the dungeon it is important to be cautious and plan out how to approach the enemy, especially in particularly crowded rooms. Players can also use some of the puzzle-solving items to stop an enemy's movement for a specific number of steps.

Combat is turn-based, but includes ideas such as the IP ("Item Points" or "Ikari Points") gauge, which is perhaps similar to early versions of the Limit Break. The IP gauge fills up when attacked, and some pieces of equipment can convert this power into a special ability, ranging from powerful attacks to unorthodox healing spells. The most unique aspect of combat is that all spells can have any number of targets, but more targets decreases the magic's potency. This gives flexibility; a spell can focus on one enemy or attack everything except the monster that can reflect magic. The maximum number of characters available in combat is four, and there is no choice between party members offered; it is guided by the storyline. There are also creatures in the game world called Capsule Monsters. Only one of these at a time can join the other characters in battle, and they cannot be controlled.

The dungeons are also riddled with a variety of switch, explosive, and positioning based puzzles. When solving these puzzles the player are given various items to help out:

These items are given to Maxim through the normal progression of the story and are required for progression through dungeons and puzzles. The puzzles are initially simple but can become very difficult later in the game.

Capsule monsters are creatures Maxim discovers that joins his party in battle. They have levels, abilities, and also multiple forms. In order to reach a new form, the capsule monster must be given items. They request special items that work more effectively than average items, but feeding them high-end items may spoil their palate and result in them constantly demanding expensive items. In order to grow into their final form they require a unique item whose sole use is to level up the capsule monster.

One of the more prominent features of Lufia II was the Ancient Cave, a dungeon consisting of 98 randomly generated floors, culminating in a boss at the 99th floor of the basement. The players' characters and Capsule Monsters are stripped of their items and reverted to level 1 upon entering the Ancient Cave. There are no save points and a descent to the 99th floor could take several hours; the only form of exit is an item called Providence. Providence is supposedly found on the 20th floor, but in reality can be located anywhere from floors 20-30, and occasionally slightly lower than that. If the player misses Providence on one floor, it will reappear later; if the player throws away Providence, it appears in the player's inventory after fighting the boss on the 99th floor.

The main attraction of the Ancient Cave is the powerful equipment that could be used permanently inside and outside of the Ancient Cave, and remained with characters even upon re-entry. The majority of these items are extremely powerful and are still useful up to and including the final boss and endgame side quests. These "blue chest items", which appeared in ornate blue chests rather than the standard red, are the key to reaching the 99th floor and killing the boss.

The final boss of the ancient cave is a giant, red jelly; this is an ironic boss because Red Jellies are the weakest monsters in the game. The Giant Jelly does not attack at all; instead, it heals the player's characters, and escapes the battle if its large health bar is not depleted by the end of the player's third turn, denying access to the Ancient Cave's final rewards. These final rewards are three pieces of armor that are not extraordinarily strong, but are still the best available for their slot.

Upon beating the game twice, "Gift Mode" becomes available. This mode places Maxim on the island where the Ancient Cave is located with no means of leaving. The player can pick and choose any possible combination from the game's cast to enter the Cave, allowing for more possibilities with one's play-style. Maxim can even enter the cave alone if the player chooses to do so. 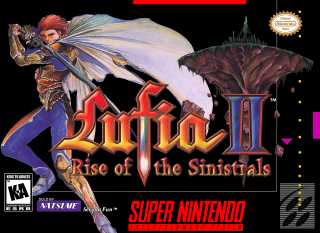