Hack into the system and hunt for rewards in randomly generated levels in this first-person shooter for the PSP.
PlayStation Portable PlayStation Network (PSP)

Coded Arms was the first ever FPS on the PSP, and the control scheme from this game has pretty much become the PSP's standard for the genre. Players move with the analog nub, aim with the PSP's face buttons, and fire with the triggers. Even though actually aiming with the face buttons on the PSP was the best way to make a FPS control scheme work without two analog sticks, it did not work very well and often resulted in inaccurate shooting.

Coded Arms has very little story to speak of but from what little story the game mentions here it is. The government created a secret program to hide military secrets inside of. Anybody trying to enter the system would be placed inside the computer and have to fight his way out. The program got out of control, and not even the government could enter it without being attacked, so they contained the program where they though it was inaccessible. They were wrong though, and a hacker managed to get into the system, but now he is fighting for his life.

Coded Arms is a first-person shooter. The game starts you off with nothing but an assault rifle, but eventually you will find pistols, sniper rifle, grenade launchers, and several other weapons in three different varieties. The first is just your regular guns. They don't fire any special ammo, and are useful against pretty much everything, but there damage is only average. The next type of gun is your bolt guns that fire robot-frying ammo. This includes the bolt pistol, bolt rifle, and the bolt launcher, a modified grenade launcher. The last type of guns are the photon guns. These weapons fire light based projectiles that are good against bug-like enemies. These guns can also be upgraded with data files that the player will find scattered all over the virtual world. These guns are all used to well, shoot stuff. There really doesn't seem to be a point to the levels at all except get from one end to the other, and kill everything in your way. The levels are randomly generated, so the player will never know where the enemies will be hiding. Coded Arms single player campaign is divided into three sections. Each sections features a different environment and different enemies. After clearing a section, players will face a boss that goes along with the theme of that area. For example, one of the sections environment is cold and mechanical looking. After clearing this area, the player will face a giant robot.

While Coded Arms single player was rather dull and boring, multiplayer was the best part of the package. Four players could participate in fast-paced enjoyable battles over a variety of maps. Sadly though, the multiplayer was local play only, and not online.
Call of Duty: Roads to Victory Medal of Honor: Heroes Medal of Honor: Heroes 2 Ghost in the Shell: Stand Alone Complex The 3rd Birthday 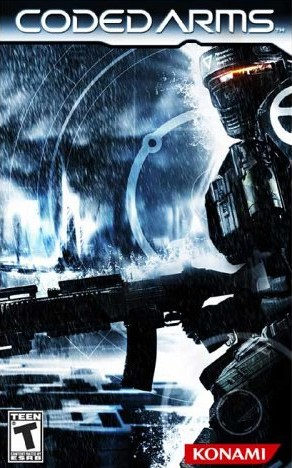