In the year 1834, London is burning and it may or may not be caused by Adam Crowley’s horrifying experiments. It’s up to a servant of God and a gymnast to defeat the Nightmare Creatures.

Nightmare Creatures is a third-person action adventure with heavy horror themes, allowing the player to choose between two player characters to defeat the evil that is corrupting London. Developed by the now-defunct Kalisto Entertainment and published by Activision, the game was released for the PlayStation on November 17th, 1997 and on the PC a month later. The game was then ported to the Nintendo 64 and released on November 30th, 1998. There was also plans to release it on the Sega Saturn, but it was quietly cancelled.

Set against the real world backdrop of the Burning of Parliament in 1834, the game uses several liberties with actual events. Adam Crowley, the newly appointed leader of the Brotherhood of Hecate, is practicing dark arts and unleashing a horde of evil creatures. London’s only hope is Father Ignatius Blackward, an expert in the occult, and Nadia Franciscus, the gymnast daughter of a doctor.

Centered mostly around melee combat, Nightmare Creatures is typically considered to be a brawler with horror elements rather than the typical survival horror theme that had been trending at the time. The player, controlling Father Ignatius Blackward or Nadia Franciscus, fights dozens of creatures that appear in the dark alleyways of real world towns within the City of London. If anything, the title is known for its eerie atmosphere and strange creature design, making it a perfect fit for the early PlayStation generation.

It all began before the Great Fire of 1666 when the Brotherhood of Hecate began experiments to transform a human into a more powerful being. Their plan was to overthrow London and then, eventually, the entire world. A writer by the name of Samuel Pepys (a true historical figure) joined the Brotherhood in 1660. Once the secret society began to develop progress, they created strong, mutated creatures which seemed to suffice for the Brotherhood, who began to develop a way to mass produce the creatures.

Pepys, taking note of the strange goings-on, began to record the experiments in his diaries and began designing a way to stop the Brotherhood and their maddening experiments. On September 2nd, 1666, the society began to gather together in a warehouse to begin preparations for their creations. It was at this time that Samuel Pepys sprung into action, locking the members in the warehouse and burning it to the ground, killing everyone inside and destroying all of their research forever. The conflagration quickly spread throughout the city, resulting in the Great Fire of London.

Nearly 170 years pass by and a massive plague has begun to sweep through the city. Those who are infected begin to mutate and disappear into the dark alleys and sewers scattered throughout the massive streets of London. Father Ignatius Blackward is called out to Chelsea by a local parish, desperate to find a solution. Soon after these events unfold, an old blackened tome is left on the priest’s doorstep. Father Ignatius, being an expert in all things occult including cabalist writings, begins to decipher some of the decaying book and discovers that it is one of Samuel Pepys’ diaries. Upon further investigation, the priest notices an entry which details the activity of the Brotherhood of Hecate, primarily their formula for creating organic mutations. He then sends the diary to a colleague in New Orleans, Doctor Jean Franciscus, who is a historian and an expert in secret societies.

After reading the diary, Doctor Franciscus journeys to London with his daughter Nadia, who is interested in pursuing a gymnastic league in the city. Once they arrive, the doctor meets Father Ignatius in order to discuss his findings. The next morning, the priest is overcome with a powerful vision. He makes his way to Jean’s hotel room, only to find him fatally wounded. As Ignatius kneels down next to him, the doctor whispers his final words, “Murder. Adam Crowley. The Brotherhood of He... The journal is gone...” Nadia arrives from a gymnastics meeting to find after her father dead and Ignatius nearby. She quickly begins to question the priest who recites her father’s final words. She vows to avenge his death by killing Adam Crowley and destroying the Brotherhood of Hecate once and for all.

At Doctor Franciscus’ funeral, a man in black robes named Henry Victor intercepts Nadia and hands her a note that reads “Know about Adam Crowley, Brotherhood of Hecate -- HV.” An address is written at the bottom of the note. On October 17th, 1834, Nadia meets with Father Ignatius at the church he is staying at in Chelsea in order to begin their search for Adam Crowley, starting with the address on the note.

The adventure begins on the streets of Chelsea where Nadia and Ignatius begin tracking down Adam Crowley. There is a sudden realization that things have gone awry as they fight through several of Crowley’s experiments through the streets of London. After finally making their way to Crowley’s lab, they find that it has already been destroyed and set ablaze in order to hide any evidence of his involvement. As they close in, Crowley becomes desperate and drinks the last of his formula, turning into a hideous monstrosity.

After a fierce battle, Crowley is defeated on the rooftops of Westminster Abbey and all of his creations burn in the flames. As Nadia and Ignatius escape to safety, it’s made clear that all of the Brotherhood of Hecade’s research has been destroyed once more and the two heroes would disappear into obscurity. However, back on the rooftops, a shadowy figure in black robes retrieves the head of Adam Crowley before disappearing himself.

Nightmare Creatures allows the player to choose a character at the beginning of the game. Ignatius is the stronger of the two, but Nadia is much faster than Ignatius. Either decision does not affect many elements of the game, as the environments and story play out exactly the same. The player progresses through sixteen levels (not including boss fights) by battling the titular nightmare creatures that roam the streets of London. Each level offers a variety of encounters and the player must use a set of melee combinations in order to survive.

Each character has their own combos and the ability to block, but the only thing that will allow the player to truly survive is by the game’s adrenaline meter. This meter is separate from the player’s health meter and will deplete when there are no monsters to fight. As the player runs out of adrenaline, so does the health slowly dwindle until the virus eventually takes hold. The only way to replenish adrenaline is to defeat monsters, which fills the meter instantaneously. There are also a number of power ups in order to help the player progress, although none of them replenish adrenaline.

While combat has a central role in the game, the player must also traverse dangerous areas of platform jumping. Usually, these platforms are surrounded by water which will instantly kill the player should they fall in. The game uses a set amount of lives to track the player and the character dies, they respawn at the exact same area they were killed, consuming one of their lives in the process. Should the player run out of lives, the game is over and they return to the start screen.

Once the player reaches the end of each level, they are graded with a percentage of the items that they found and the percentage of enemies that they killed. In order to find each item or enemy, the player must find secret areas that are hidden within the back alleys of each level. Sometimes items, and even monsters, are hiding within boxes or windows that can be destroyed.

These lumbering, weak undead creatures are unleashed on the player immediately, serving as the weakest creatures in the game. Unless they are properly disposed of by severing the torso, these bipedal monsters will continue to rise and attack.

The undead are not the only creatures roaming the streets of London, as these poor souls have been infected with lycanthropy. These part-human, part-wolf hybrids are numerous and are keen on jumping at the player from concealed locations.

These small, flying creatures will disguise themselves as statues early on in the game, but in later levels, they will appear as red flying creatures. Both incarnations will spit fireballs at the player as the fly about.

Named after Samuel Pepys’ documentations, this creature has been horribly mutated by the joining of several citizens. With three heads and three arms, these massive creatures will appear sporadically, usually behind several barrels that are thrown at the player.

These large, blue creatures are the strongest in the game if they are able to get enough hits in. Taking several blows to kill, these monsters have a thick, rocky hide that they use to knock down walls and crush the player.

The Brotherhood’s research didn’t end at just the citizens. Their horrific formula also affected the insect population, starting with the roaches that infest the sewers of London. These mutants will lunge and attack the player very quickly but are dispatched easily.

Lurking in the River Thames, these creatures use several tentacles rather than eyes to find and attack the player from afar. Its round face sports only a massive maw with hundreds of teeth, should its prey get too close.

These shrieking female mutants replaced their limbs for wings and fly about in groups, waiting to swoop in on the player. Since they move at an incredible speed, they are difficult to catch up with but are much easier to kill.

Hampstead Heath has been infested by mutated spiders, which have quickly multiplied and moved into the city. Many of London’s streets are covered in their grotesque green webbing as they hunt the citizens for food.

These former members of the Brotherhood of Hecate have been forced to drink the horrific formula and wander the streets with the rest of the undead citizens. While they certainly look dapper and gentlemanly, they won’t hesitate to use their knife to attack the player.

These mutated pests are exactly that. Rodents that roam about London have been infected and will now jump out at the player with their giant, dirty claws. Not much caution is needed, however, as they are easily killed by a slice to the torso.

Just like the demons earlier in the game, these stone-encrusted demons will pose as statues until the player is too close, lunging at them with their massive claws. While these winged beasts never take flight, they are strong and difficult to deal with.

Introduced in the later levels, these demons spring from the burning areas of London, breathing fire at the player and attacking with quick bites and scratches. As one of the most difficult creatures in the game, these creatures do not appear very much.

Nightmare Creatures was released nearly one year after polygonal 3D third-person action titles like Resident Evil and Tomb Raider had already hit the PlayStation. The game was critiqued for its harsh difficulty but praised for its originality and atmosphere. The title sold well and the sequel, Nightmare Creatures II, was officially announced in 1999 for a release in early 2000. 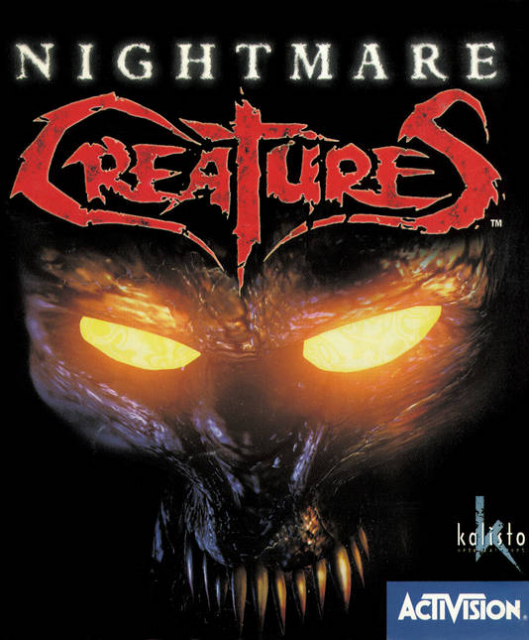